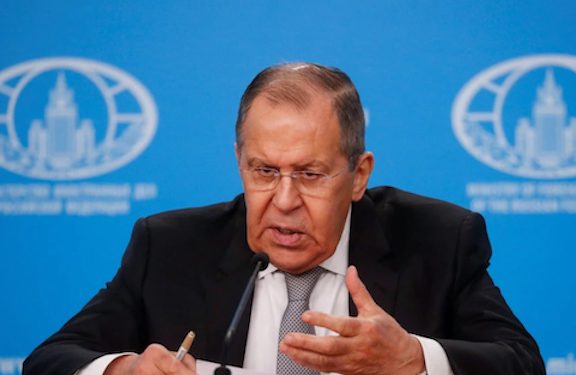 Yerevan has made a new proposal on the process of delimitation and demarcation of the borders between Armenia and Azerbaijan, Russia’s Foreign Minister Sergei Lavrov told reporters on Friday, adding that Russia will convey Armenia’s plans to Azerbaijan.

“Just yesterday, I spoke to my Armenian counterpart who had new proposals, which we will pass along to Baku. We will look at how to have it (the commission) work as soon as possible,” Lavrov added. He did not provided details about Yerevan’s proposal. Armenia’s Foreign Ministry also has not made a statement on the matter.

“It is optimal to create this commission by including issues on its agenda that need to be addressed as a matter of priority,” Lavrov said, adding that while Yerevan and Baku are making proposals on how to proceed with the commission, disagreements still remain.

“In order to create the commission, it is necessary, first of all, to agree on the conditions. These conditions are being discussed now. There are differences there,” Lavrov added.

Russia’s top diplomat clarified that the delimitation and demarcation of borders is not related to Nagorno-Karabakh and other regional issues. It is, he said, a matter between Armenia and Azerbaijan.

After Prime Minister Nikol Pashinyan, Russian President Vladimir Putin and Azerbaijani President Ilham Aliyev met in Sochi late last year they agreed to work toward the creation of a bilateral commission on the delimitation of the state borders between Armenia and Azerbaijan with the assistance of Russia.

Lavrov said he is convinced that unblocking all transportation links in the South Caucasus will create beneficial opportunities for all countries of the region—Armenia, Russia, Iran, Turkey, Georgia and Azerbaijan—referring to the so-called “3+3” plan that envisions the creation of a regional block involving the aforementioned countries. This scheme was introduced by Turkey’s President Recep Tayyip Erdogan and was wholeheartedly supported by his Azerbaijani counterpart Ilham Aliyev.

An initial meeting between representatives of Armenia, Azerbaijan, Turkey and Russia was already held in Moscow. Iran has expressed its tacit approval, but Georgia has on numerous occasions rejected the plan, saying that it cannot work within an alliance that includes Russia.

Lavrov on Friday said that if Georgia joining this process will not obligate Tbilisi to change its political stances.

He said since Moscow does not have diplomatic relations with Georgia, it has less opportunities to explain the advantages of this scheme to Tbilisi. Hence, he said, Russia has asked it Armenian, Turkish and Azerbaijani partners to explain the benefits to Georgia.

Lavrov said it would be in Georgia’s interest to join the plan “without preconditions.”