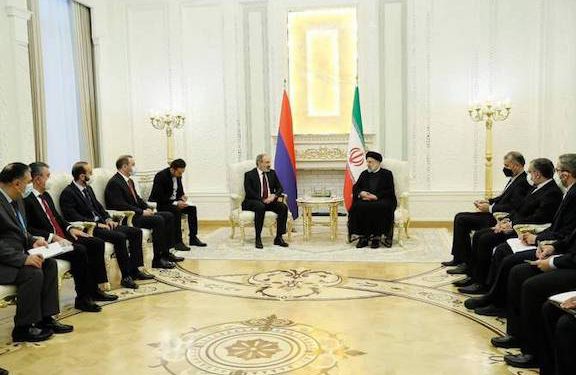 In the wake of the chaos created by Azerbaijani forces on the road from Iran to Armenia this week, Prime Minister Nikol Pashinyan met with Iran’s President Ebrahim Raisi in the Tajikistan capital of Dushanbe where both leaders are attending a summit of the Collective Security Treaty Organization.

Pashinyan’s office reported on Friday that the two leaders discussed the further development of the bilateral relations, the uninterrupted operation of cargo transportation between the two countries and the ongoing developments in the region.

Azerbaijani forces began stopping Iranian cargo trucks traveling on the Goris-Kapan highway and levying taxes on the vehicles. On Wednesday, Azerbaijan’s National Security Service confirmed that two Iranian truck drivers were arrested for allegedly entering Azerbaijan illegally, heightening a standoff on the highway, which began at the end of last month when Azerbaijani blockaded the road, halting civilian and commercial traffic.

It also became evident this week that Pashinyan had relinquished a 13-mile stretch of the highway to Azerbaijan in December as part of the November 9 agreement, which forces Armenia and Azerbaijan to demarcate and delimit the border between the two countries. Pashinyan rationalized his decision saying that he wanted to prevent military actions along the border. In May, Azerbaijani forces breached Armenia’s sovereign border and have set up positions in the Gegharkunik and Syunik provinces, where Armenian soldiers have died as a result indiscriminate shooting by Azerbaijan.

Armenia’s Deputy Prime Minister Mher Grigoryan said on Friday that the government has been engaged in “intensive” efforts to resolve the issues on the Goris-Kapan highway and improve transportation through Tatev as an alternate route.

“We are now working intensively in two directions, both to resolve the problem and in terms of finding alternative solutions,” Grigoryan told reporters on Friday. “I think the efforts will continue intensively in both directions, and eventually we will find some solution to this problem.”

“If we provide an alternate solution it would certainly be a very good solution, because it would balance the situation,” Grigoryan said at the press briefing, saying that such a step would mitigate security risks and provide technical solutions that would make traffic safer.

“All roads must be there and must fully function. That’s our desire and goal,” added Grigoryan.

Back in Dushanbe, Pashinyan and Raisi, who were meeting for the second time since they both assumed office, highlighted the need to accelerate the efforts of an inter-governmental commission, which is tasked with advancing economic ties between Tehran and Yerevan.