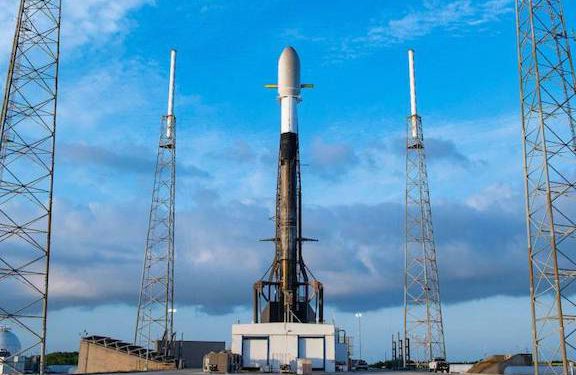 Armenia launched a satellite into orbit from Cape Canaveral, Florida on May 25

Armenia launched its first ever earth observation satellite into orbit on Wednesday on a SpaceX Falcon 9 rocket that left Cape Canaveral, Florida.

The announcement of the launch was made by Prime Minister Nikol Pashinyan during a cabinet meeting on Thursday. He said the satellite launch was a join effort with Armenian state company Geocosmos and the the Spanish Satlantis company.

“We can’t overstate the significance of this. With this, Armenia is embarking into an era of space activities and we hope that our rich traditions in this area will be restored. I am speaking about the space scientific-production area which existed in Armenia for many years. In this context I’d like to stress that one of our priorities is the localization of space technologies in Armenia, as well as organizing the production of space equipment,” Pashinyan said.

According to the prime minister, by 2023 Armenia will have a satellite control center and downlink facility, which will render data receiving and transmission services for other satellite operators.

He said the images captured by the Armenian satellite will be used for various purposes, such as border surveillance.

“The images made by the satellite will be used in Armenia for border security, prevention and management of emergency situations, preservation of the environment, including monitoring of climate change, urban development, road construction, geology and other sectors,” Pashinyan said.

The process to launch the satellite began several years ago, with final stages accelerating this year, Armenia Deputy High-Tech Industry Minister Davit Sahakyan told reporters on Thursday. It is expected that the satellite will remain in orbit for four years.

“It is a powerful infrastructure for building a space ecosystem in the country. During the Soviet years, Armenian scientists made great achievements in this field,” said Sahakyan. “Now, by leveraging our past knowledge and experience, we are going try to restore the success of the past.”

“This is a multi-layered ecosystem. It involves the production of space equipment, software development, and other facets. Armenia has that potential,” said the deputy minister, adding that the goal is to promote the activation and development of enterprises operating within this sector.

An important component in the development of the sector is the establishment of a satellite control center and receiving station.

Sahakyan explained that various events are being planned for the advancement and development of the sector in Armenia. There are already companies in the field that have registered results in terms of attracting tangible financial investment. They are successful not only in the Armenian market but also abroad.

The Deputy Minister did not provide details on the process of launching the first space satellite of the Republic of Armenia into orbit, taking into account the sensitive nature of components involved in the effort.