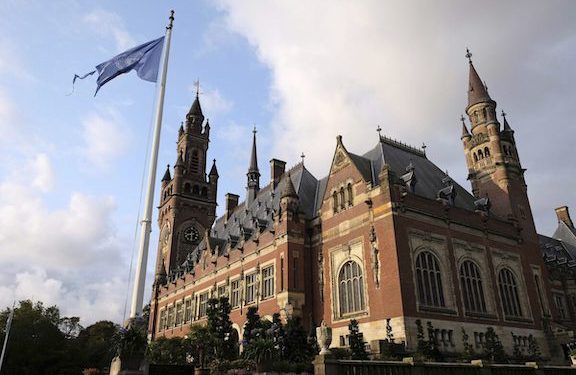 The UN's International Court of Justice in the Hague

Armenia has applied to the International Court of Justice asking the United Nations court to intervene in ending the Lachin Corridor blockade, which is in its 19th day.

Armenia has told the court that “[o]n 12 December 2022, Azerbaijan orchestrated a blockade of the only road connecting the 120,000 ethnic Armenians in Nagorno-Karabakh with the outside world, thereby preventing anyone and anything from entering or exiting,” the court, which is headquartered in the Hague, said in a statement.

“The blockade is ongoing as of the date of [its] Request, and there are no signs that it will be lifted any time soon,” Armenia told the court in its application.

In another move, Armenia is now looking to ratify the International Criminal Courts founding treaty, to provide another international legal avenue to take action against Azerbaijan.

While Armenia signed what is known as the Rome Statute in 1998, the Armenian parliament still has not ratified the court’s charter. In 2004 the Constitutional Court deemed that the treaty contradicted Armenia’s Constitution, which provides national sovereignty over judicial affairs.

Armenia’s government on Thursday asked the Constitutional Court to look into whether amendments to the Constitution it now conforms to the provisions of the Rome Statute.

Armenia’s Justice Minister Grigor Minasyan said that parliamentary ratification of the treaty would allow Yerevan to appeal to the ICC over Azerbaijan’s military attacks on Armenian territory launched since May 2021.

“The consequences of that aggression are still there because Azerbaijani troops remain deployed in various parts of Armenia’s sovereign territory,” he said, adding that The Hague tribunal can take up the case even if Baku does not accept its jurisdiction, reported Azatutyun.am.