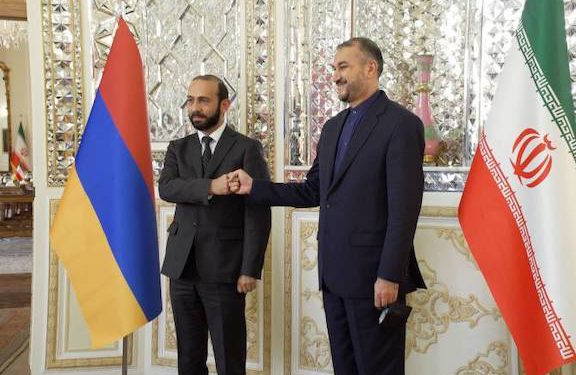 Mirzoyan was in Tehran on Monday and met with his Iranian counterpart, Hossein Amir-Abdollahian, with both emphasizing that any actions that destabilize the region were inadmissible.

Last week, Aliyev, in an interview with the Turkish Anadolu news agency, complained that Iran was holding military exercises in the northwest region of the country that borders Nakhichevan, claiming that the drills were a reaction by Tehran to the fines being imposed on Iranian truck drivers.

Tehran took Aliyev’s comments as an affront to Iran’s sovereignty and its right to protect its citizens against attacks. Amir-Abollahin delivered a terse message to Baku last week, when he was welcoming Azerbaijan’s new ambassador to Iran.

During their meeting, Mirzoyan briefed Amir-Abollahin on the progress of Armenia’s efforts to construct alternate routes that bypass the Goris-Kapan highway and discussed the construction of the “North-South” highway.

In discussing the developments in Karabakh, Mirzoyan emphasized the need for the unconditional and swift repatriation of Armenian prisoners of war, civilian hostages being held in Azerbaijan.

Mirzoyan praised Iran’s position in recognizing Armenia’s territorial integrity at a time when Azerbaijani forces have breached Armenia’s sovereign borders and have set up bases in the Gegharkunik and Syunik provinces.

The two highlighted the need to strengthen cooperation between the two countries in order to confront regional challenges.

Aliyev’s remarks that angered Tehran’s leadership were also on the minds of members of Iran’s parliament, 165 of whom signed a document saying that any changes in border in the region represented a “red line” for their country.

Any geopolitical change and alteration of borders of neighboring countries is a red line for the Islamic Republic of Iran, said the statement of the 165 lawmakers, which was read during a parliament session on Monday, the IRNA news agency reported.

“Iran would neither tolerate any action by aliens in this regard nor allow the soil of other countries to be a base for the Israeli regime’s provocations,” the statement stressed.

The lawmakers also praised the military exercises that took place on Friday in Iran’s northwest region, saying that the drills were a “message of peace” to Iran’s neighbors and a “warning to Israel.”

The statement also warned Azerbaijan’s government to refrain from “divisive actions” and reject any other entity from making trouble in the region. The lawmakers urged Iran’s foreign ministry to share their message with the governments of the Caucasus nations.

The need to reinforce relations between Armenia and Iran was also voiced during a meeting between Armenia’s National Security Chief Armen Grigorian and Iran’s Ambassador to Armenia, Abbas Badakhshan Zohouri.