Armenia Responds to Aliyev’s Claim of Yerevan Being Part of Azerbaijan, Warns of Ethnic Cleansing 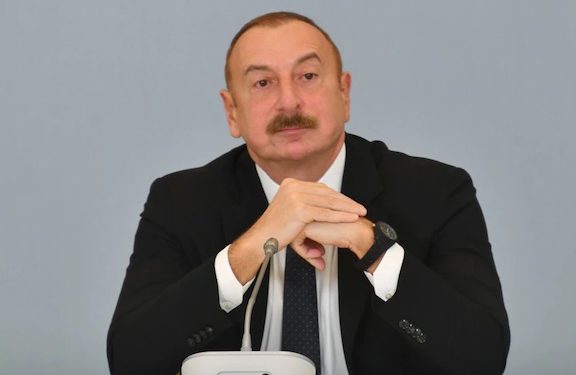 President Ilham Aliyev of Azerbaijan speaks at a forum in Baku on Nov. 25 (Azertaj photo)

Armenia’s Foreign Ministry on Saturday responded to Azerbaijani President Ilham Aliyev’s latest territorial claims from Armenia and warned that Baku’s provocations against the people of Artsakh are part of Baku’s policy of ethnic cleansing.

Speaking on Saturday to what the president’s office called “a group of Azerbaijani intellectuals of Armenian origin,” Aliyev, again, falsely claimed that Yerevan was an Azerbaijani city.
“The newly formed Azerbaijan Democratic Republic, with one of the first decisions made in 1918, gifted one of our historical cities, Yerevan, to Armenia. It was an unforgivable step, it was treasonous and a criminal,” said Aliyev.

During the establishment of the first Republic of Armenia, as well as in the period preceding it, Yerevan was never under the control of Azerbaijani or Turkish forces, so it could not be transferred to the Armenians by any arbitrary decision made by them.

Aliyev also spoke about another “crime committed against Azerbaijan,” when he addressed the issue of Zangezur.

“In 1920, by the decision of the Soviet government, Zangezur was transferred to Armenia. Its purpose was clear: to geographically separate Azerbaijan from Nakhichevan and Turkey,” said Aliyev.

On the same day, during a telephone conversation with President Emmanuel Macron of France, Aliyev complained and alleged that Armenia continued to “occupy” part of Azerbaijan, when in fact it is Azerbaijan that has been occupying the sovereign territory of Armenia since May 2021.

In its statement on Saturday, the Armenian foreign ministry called on the international community to compel Azerbaijan to end its “warmongering and maximalist rhetoric” and withdraw its troops from Armenia’s sovereign territory.

Below is the translated text of the statement.

Today, on December 24, the thoughts expressed by the President of Azerbaijan Ilham Aliyev during a meeting with the representatives of the so-called “Western Azerbaijan,” once again prove that the leadership of that country is in no way interested in the establishment of peace and stability in the South Caucasus,” said the foreign ministry statement.

Furthermore, the latter not only openly accepts the fact that it has occupied the sovereign territory of Armenia through the use of force but also is making new territorial demands and threats of force toward the Republic of Armenia, overtly demonstrating disdain for both international law and international partners.

Once again, emphasizing the determination of the Armenian side to build peace and stability in the region, we call on international partners, through targeted statements and actions, to compel Azerbaijan to stop its warmongering and maximalist rhetoric, fulfill its assumed commitments, withdraw Azerbaijani troops from the sovereign territory of the Republic of Armenia and restore the regular functioning of the Lachin Corridor.

It is Difficult to Conduct Constructive Talks Amid Ongoing Threats, Yerevan Says