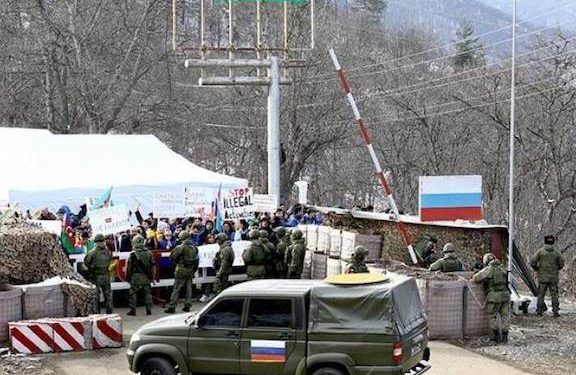 The Artsakh blockade has entered its 7th week

The Russian Foreign Ministry on Thursday said Prime Minister Nikol Pashinyan’s statement that Armenia does not need Russia as the guarantor of its security was “absurd,” further escalating tensions between Moscow and Yerevan, whose government has stepped up its criticism of Russia.

During a press conference on Tuesday Pashinyan said Russia’s reluctance to counter aggression toward Azerbaijan suggests that “Russia’s military presence in Armenia not only doesn’t guarantee Armenia’s security but on the contrary creates threats to Armenia’s security.”

Armenia’s leader said that Azerbaijan was resorting to aggressive actions against Armenia due to Baku’s perceived threat from the Russia-Armenia alliance.

“Statements from Yerevan that Russia’s presence is posting some threats to Armenia’s security are absurd,” the Russian Foreign Ministry spokeswoman Maria Zakharova told a press briefing on Thursday. “For decades our military and border guards have been making significant contributions to Armenia’s security, guarding its borders.”

She said Moscow is determined to further strengthen bilateral relations and cooperation through the various common associations such as the Commonwealth of Independent States, the Eurasian Economic Union and the Collective Security Treaty Organization.

Zakharova said that the current leadership in Yerevan has publicly stated in the past that the Russian military presence is in line with Armenia’s national interests.

The Russian foreign ministry spokesperson also seemed perplexed, saying that Moscow is attempting to figure out the conflicting statements emanating from Armenia’s leader.

She said that on the one hand, Pashinyan announced that Armenia is ready to sign a peace treaty with Azerbaijan based on Russian proposals and on the other hand, Yerevan is discussing the need to settle the Karabakh conflict based on Western proposals.

Nevertheless, Zakharova said, Russia is doing its utmost to de-escalate tensions on the Lachin Corridor, whose blockade by Azerbaijan is entering its second month. She said that the blockade was on the agenda of talks that were set to take place in December and were proposed by Moscow, however, Armenia opted to cancel those discussions.

“I would like to emphasize that unfortunately the Armenian side missed a good opportunity to hold another round of talks with the Azerbaijanis in Moscow on December 23, 2022 and use it to discuss problematic issues, including the situation around the Lachin corridor. But be that as it may, our proposal is still in force. We are ready to provide a platform for talks between the foreign ministers of Armenia and Azerbaijan,” she said.

“If our Armenian partners are truly interested in a solution to these problems through the comprehensive implementation of trilateral agreements at the highest level, then, instead of being pedantic, we must continue working together,” Zakharova said.

Zakharova also touched on Armenia’s decision to back out of hosting joint CSTO military exercises. Pashinyan made the announcement on Tuesday, saying under the current circumstance it would be “inexpedient” for Armenia to host such drills.

Although Zakharova said that Yerevan is honoring its commitments as a CSTO member-state, she did remind reporters that Armenia did not send a military contingent to the same exercises last year in Kazakhstan.

“This certainly creates difficulties for our allies, forcing them to reshape the already coordinated military plans. As far as we know, such work is underway within the CSTO, and we believe that as a result optimal solutions will be created to organize exercises of CSTO peacekeepers,” she said.