Armenia Says it Will Not Host CSTO Military Drills 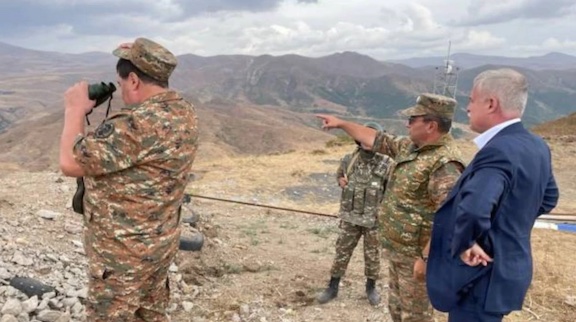 Prime Minister Nikol Pashinyan on Tuesday said that the current situation in Armenia will make it inexpedient for Armenia to host the Collective Security Treaty Organization joint military drills, adding yet another wrinkle to tensions with Moscow.

“The Armenian Minister of Defense has already notified the CSTO Joint Staff that we do not consider holding such exercises in Armenia in this situation to be expedient. The exercises will not take place in Armenia, [at least] this year,” Pashinyan said when asked to comment.

Last week, Russia’s Defense Ministry announced that the CSTO’s annual exercises would be held in Armenia, which in November hosted a summit of the group’s leaders, but did not approve the final statement. Pashinyan at the time said it did not condemn Azerbaijan for invading Armenia’s sovereign territory.

The Kremlin was quick to respond to Yerevan’s announcement saying that Moscow will seek more clarification on this abrupt decision.

“This is a rather recent statement by the Armenian Prime Minister,” the Kremlin’s spokesperson Dmitry Peskov told RIA Novosti. “I think our partners in the CSTO will be in contact, will clarify details on the position of Armenia. In any case, Armenia is a very close ally of ours. We will continue dialogue, including on issues which are now very complicated.”

Speaking at a press conference on Tuesday, Pashinyan went on to further call into question Russia’s effectiveness as Armenia’s security partner, doubling down on his ongoing criticism of Moscow.

Pashinyan said that Yerevan has also seen Russia as its number ally and the guarantor of its security. Even following the 44-Day War, Armenia continued to perceive Moscow in that vein and warned about the potential for Azerbaijan to attack Armenia’s internationally recognized borders.

He said when Azerbaijan, in fact, breached Armenia’s borders in May 2021, Armenia anticipated concrete actions from Russia and other security partners as part of previously reached agreements.

“And in response to Armenia’s appeals and applications, we received the argument that the borders between Armenia and Azerbaijan are not demarcated. Within this context a substantial contradiction emerged, in this case where does that red line pass? We have brought his up this up within our bilateral relations relations and the answer to this question has become very important for building future relations,” Pashinyan said.

The prime minister emphasized that the so-called red line was the de jury the CSTO had the responsibility, specifically with Armenia as member-state..

“During the CSTO summit in Yerevan our main objective was that not only do we have a problem in theory, but also in practice, to show and understand what the CSTO’s area of responsibility is in Armenia,” Pashinyan said, adding that without this explanation Yerevan would not be able to agree to the document. He said, however, that the matter is still on the agenda of talks.

Pashinyan also pointed out that in its discussion with Western countries, Baku is rationalizing its aggression as a “preventive” measure, by pointing to the close relations between Armenia and Russia and feigning fear of aggression against Azerbaijan.

Pashinyan called Azerbaijan’s logic absurd and said that Baku was taking advantage of the Ukraine conflict to kowtow to the West.

“We would like to draw the attention of our Russian partners to this fact, noting that their lack of reaction or response means that Russian military presence in Armenia not only is not guranteeing Armenia’s security but, on the contrary, is posing threats to Armenia’s security,” Pashinyan said, explaining that this matter has been the gist of Yerevan’s discussions with Moscow.

The prime minister also addressed recent discussions about the possibility of Armenia joining the so-called Russia-Belarus Union State, saying that Yerevan has not receive an official offer to join.

He said, however, that “reality is not as simple as it seems.”

“There has not been an official offer and there could not be one. But unfortunately reality isn’t as simple as it seems. Sometimes one has to look at matters more closely for it is not what is presented within the text of issues but rather the subtext,” Pashinyan said. “We must consider the global processes.”

“I can say that for us, generally, the sovereignty, independence and statehood of the Republic of Armenia are absolute values. And like I have said before, we consider it our duty and mission to do everything to ensure the eternity of our state, homeland and statehood,” added Pashinayn, who when pressed about whether unofficial channels were pressuring Armenia, said that he considered narratives by analysts [within Russian press] as a “unofficial channel.”