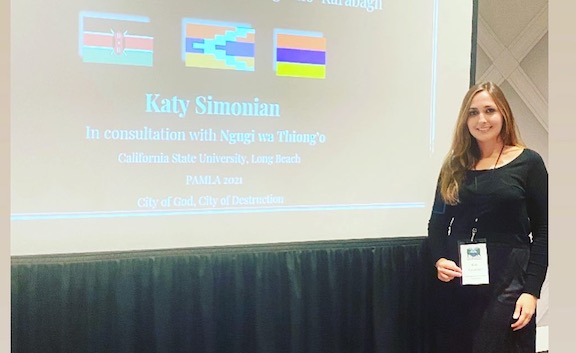 Katy Simonian at the

Armenia took center stage at the Pacific Ancient and Modern Language Association’s 2021 international literary Conference. PAMLA is a global community of scholars, educators, editors and writers. The Conference, which convened in Las Vegas, Nevada from November 11 to 14, welcomed papers across an array of panels that represent PAMLA’s commitment to diversity and excellence.

Professor Katy Simonian presented her article, “Kenya’s Past, Armenia’s Present: Ngugi wa Thiong’o’s ‘Weep Not, Child’ and the Burial of Memory in Nagorno-Karabagh” on the Cultural Studies panel. Simonian, who serves as a Lecturer in the Department of English at California State University, Long Beach, examines the intersection of Kenyan political history and Armenia’s current battle to combat cultural genocide in Artsakh and maintain its own political autonomy in the face of Azeri aggression in the aftermath of the 45 Day War.

Using the creative and theoretical works, “Weep Not, Child” and “Decolonizing the Mind” from literary icon, Ngugi wa Thiong’o, Simonian explores the haunting parallels between Britain’s colonization of Kenya and the many threats to Armenia’s independence that continue to plague efforts to facilitate democracy across the region.

“My research showcases the phenomena of linguistic imperialism being used as a tool for cultural genocide as well as a mechanism for political resistance in the face of oppression,” said Simonian, who specializes in Postcolonial Studies and Composition at CSULB.

For years, she was inspired by the work of Ngugi wa Thiong’o who is a foundational and transformative figure of 20th Century Literature. When preparing her research, she sought the guidance of the author himself, who has become a mentor and has since developed a deep interest in Armenia’s position within the discourse of Postcolonial Studies. As Kenya’s most prolific writer who remains on the short list for the Nobel Prize in Literature, Ngugi wa Thiong’o is heralded for his exploration of linguistic imperialism and his own steadfast commitment to writing in Gikuyu, his native tongue, before translating his work into English. For Ngugi, the act of writing in one’s native language not only preserves culture but most significantly, contributes to the enrichment of a community’s linguistic tradition and ability to advocate for self-determination – a goal Armenians certainly share.

The collaboration with Ngugi wa Thiong’o is ongoing, as Simonian emphasizes the connection between Kenya’s past and Armenia’s present in order to highlight the possibilities for a democratic future for both countries when the recognition of land, language and identity is placed at the core of political policy and promoted through art.

When asked what inspired her research, which began last Fall, she reflects on her own education. As a Mesrobian graduate and native Angeleno, she was raised with a passion for social justice and a deep sense of pride in her Armenian heritage. “All of the credit goes to my incredible mother, who has always instilled in me the importance of our Armenian culture,” she said. “It’s a pleasure to honor my Armenian heritage through my work.”

While conducting classes on Zoom, she found herself teaching Ngugi wa Thiong’o’s “Weep Not, Child” during one of the worst peaks of the pandemic. “The book has always carried special meaning for me,” remarked Simonian, “but to be reading about a family whose ancestral lands were seized, as they struggle to fight back against oppression and maintain their cultural identity, knowing that Artsakh was under attack, gave the work a haunting poignance.”

“The connection was always there – but it summoned something in me – not just a need, but a sense of responsibility to amplify Armenian voices now more than ever,” Simonian said.

Her presentation also featured images that highlight the work of Armenian activists across the Diaspora, who seek to combat the media campaign geared toward promoting cultural erasure and silencing Armenian voices within Artsakh.

While Armenia’s challenges are immense, particularly the ongoing conflict in Artsakh that continues to endure a stunning lack of media coverage, Simonian meets said challenges with unwavering optimism. “It is important for me to raise awareness about Artsakh for those outside of the Armenian community. As Armenians, we know what it means to feel forsaken by the international community and that feeling often carries an assumption that people simply do not care. The truth is, people do care. They care about injustice. So many can relate to our experiences. When we know about our shared experiences, we can build connections across cultures. I endeavor to pursue that goal in my teaching and writing.

Katy Simonian is a professor, editor and writer who currently serves in the English Department of California State University, Long Beach. Her primary areas of specialty are Postcolonial Literary Studies with an emphasis on short fiction, Twentieth Century British Literature and Composition. She has written extensively on the nature of linguistic imperialism, colonial hybridity and metaphysical empire and presented on the works of Chinua Achebe, Ngugi wa Thiong’o, Jean Rhys, and Brian Friel among others. She serves as Chair of the Literature and Religion Panels for PAMLA and continues her research on Armenian Studies and literature of the postcolonial era.