Armenia Will Not Tolerate Occupation of Its Borders, Yerevan Tells Moscow 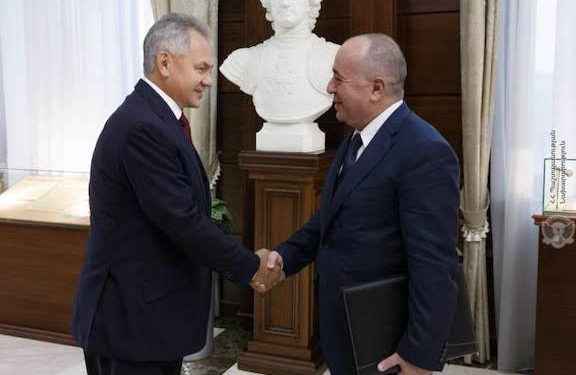 Armenia will not tolerate the occupation of its border regions, Armenia’s Defense Minister Arshak Karapetyan told his Russian counterpart Sergei Shoigu during a meeting in Moscow on Wednesday.

Karapetyan stressed that the Republic of Armenia remains committed to the establishment of lasting peace in the region, as well as to continuing of negotiations on that front. However, he said, at the same time, Yerevan will not tolerate the occupation of its border regions and will take all necessary steps to restore Armenia’s territorial integrity.

While noting that the Russian peacekeepers in Artsakh have been able to restore an uninterrupted link with Armenia, Karapetyan said that Azerbaijan’s periodic ceasefire violations in areas directly under the Russian command was inadmissible for Yerevan. He cited a reported drone strike on Artsakh military positions by Azerbaijani forces on Wednesday as an example.

Shoigu said that Russia is ready to support the modernizing of Armenia’s military, reported the TASS news agency.

“We attach significant importance to the development of our partnership in the military sector in both a bilateral format and within the CSTO,” Shoigu told Karapetyan, according to TASS. “We are ready to continue supporting the implementation of the reforms programs in the Armenian Armed Forces.”

Shoigu pointed to what he called “the well-equipped” 102nd Russian military base in Armenia as a guarantor of security. “Armenia is Russia’s ally and key partner in ensuring peace in Transcacuasia, and we are very eager in preserving peace in that region,” the Russian defense minister said.

The two defense leaders also discussed a wide-range of issues related to the relations between the two countries, with Karapetyan briefing Shoigu about the ongoing reforms in Armenia’s military.