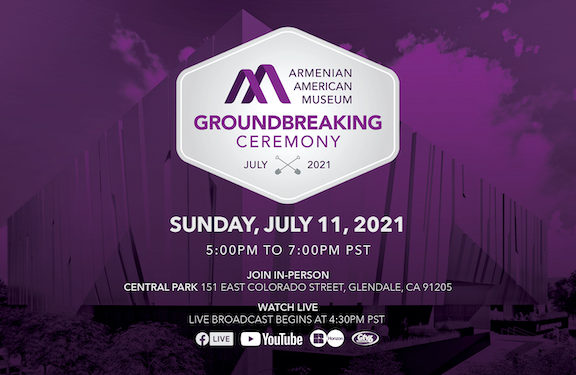 GLENDALE—The Armenian American Museum has announced that the highly anticipated Groundbreaking Ceremony of the landmark center will now be open for in-person attendees to join the celebration following the State of California’s updated public health guidelines for outdoor gatherings.

The historic Groundbreaking Ceremony of the Armenian American Museum will be held on Sunday, July 11, from 5:00 to 7:00 p.m. PST. The event is open to the public. All are invited to join the event by attending in-person or watching the live international broadcast via television, social media, and streaming channels.

“We are thrilled to have the opportunity to invite the public to join us by attending in-person or watching the live broadcast,” stated Executive Chairman Berdj Karapetian. “We look forward to celebrating this major milestone with friends and supporters across the country and around the world.”

The Groundbreaking Ceremony will be held outdoors at the future site of the museum in Central Park at 151 E. Colorado St., Glendale, CA 91205. Limited seating and refreshments will be provided for in-person attendees.

Public parking will be available at the Marketplace Parking Structure at 120 S. Artsakh Ave., Glendale, CA 91205. The first 90 minutes are free of charge with no validation. The parking structure is within walking distance of the ceremony site.

The Groundbreaking Ceremony will be broadcasted live from Central Park to a worldwide audience. The live broadcast will be available on Facebook Live, YouTube Live, Horizon TV, and GTV6. The Live Show begins at 4:30 p.m. PST.