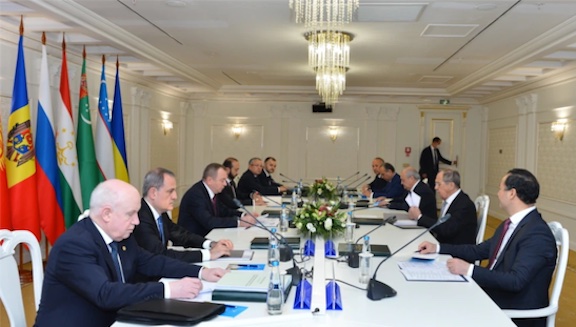 A scene from the Oct. 14 meeting of the Armenian and Azerbaijani foreign ministers in Minsk (Official publication)

The foreign ministers of Armenia and Azerbaijan, Ararat Mirzoyan and Jeyhun Bayramov, met on Thursday in Minsk to discuss the Nagorno-Karabakh conflict settlement process. The meeting was mediated by their Russian counterpart Sergei Lavrov.

Armenia’s foreign ministry reported that the meeting on Thursday focused on issues related to the implementation of the November 9 declaration.

Mirzoyan highlighted that some provisions of the November 9 declaration have not been implemented yet, emphasizing the need for the quick and unconditional return of Armenian prisoners of war and other detainees currently being held in Azerbaijan.

Armenia’s top diplomat also reiterated the need for a comprehensive settlement of the Nagorno-Karabakh conflict mediated by the OSCE Minsk Group co-chairs, based on provisions and elements already addressed with the parties.

Thursday meeting, which took place on the margins of CIS summit in the Belarus capital, was the second between the two foreign minister. The first was held last month on the sidelines of the United Nations General Assembly and was initiated by the OSCE Minsk Group co-chairs.

Ahead of the meeting, Lavrov met separately with Mirzoyan and Bayramov.

“Karabakh must always receive our attention,” Lavrov told Mirzoyan during their meeting. Lavrov said during his meeting with Bayramov they discussed unspecified “issues that need to be resolved,” according to Azatutyun.am.

Lavrov and Mirzoyan also discussed issues related to the CIS, as well as advancing Russia-Armenia relations.