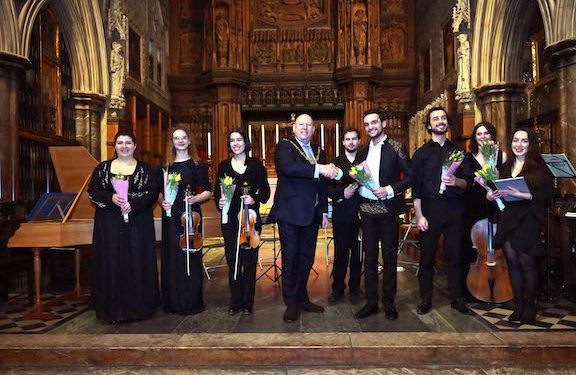 Participants of the “Baroque Opera Arias and Music” concert

An exclusive concert titled “Baroque Opera Arias and Music” was held in St. Cuthbert’s Church, in the Royal Borough of Kensington and Chelsea, London on March 26. This special concert was one of the rare Baroque concerts held in London, organized by Armenian and international musicians.

The event was organized by the British-Armenian Klingen Choir and Cultural Association, led by artistic director and conductor Sipan Olah.

The concert was attended by the London Royal Borough of Kensington’s Mayor Gerald Hargreaves; the Anglican, Roman Catholics and Armenian Apostolic Churches Reverend Fathers Paul Begot, Jim Curry, and Shnork Baghdasaryan, respectively; director of the Italian Cultural Institute in London Dr. Katia Pizzi; members of the House of Lords; chairman of the Armenian Community Council in the UK Armand Abramyan; chairmen of a number of Armenian organizations in the UK; and musicians from the Royal Academy of Music and the Royal College of Music in London.

1. Scenes from the “Baroque Opera Arias and Music” concert held in London on Mar. 26

All music scores where arranged by Sipan Olah for this instrumental ensemble. The musicians who were present at the concert highly appreciated these unique arrangements of this masterpieces, noting the unique themes given to the instruments, the dynamics, and masterfully perfect performance corresponding to the authentic Baroque style of music.

At the end of the concert, Mayor Gerald Hargreaves delivered a speech of gratitude, emphasizing the uniqueness of this concert in the life of today’s music-loving London society. He highlighted his appreciation for artistic director Maestro Sipan Olah and the KCCA for their great and professional work in presenting Armenian and international music in London and the United Kingdom.

Project SAVE Launches Series on Power and Art of Photography