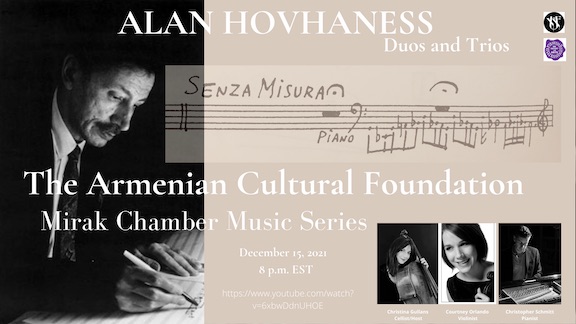 ARLINGTON, Mass.—Cellist Christina Gullans and the Armenian Cultural Foundation have partnered to host Senza Misura (“Without Measure”), a chamber music concert dedicated to Alan Hovhaness’ life and narratives. The program of duos and trios, for violin, cello and piano, is inspired by mountains, Bach, Hindu mythology, love, and Hovhaness’ own Armenian heritage as well as works by Armenian women composers. The concert will offer listeners across-cultural experience about foreign traditions, people, and places, in a musical setting endowed with empathy and understanding.

The event, co-sponsored by the Amaras Art Alliance is part of the Armenian Cultural Foundation’s Mirak Chamber Music Series which aims to place the world’s finest classical music in the center of cultural life for the Armenian community in Boston and for the general public in Arlington, MA. It will feature Cellist Christina Gullans, who was praised for her “incredible depth” [Broadway World Review], “haunting sound” [Boston Arts Review], “exemplary musicianship” [Guy Rickards, Musical Opinion]. She is a Washington, D.C. based chamber musician who will be joined by violinist Courtney Orlando and pianist Christopher Schmitt.

The repertoire also includes a work, Seyran, by Komitas (1869-1935), musicologist, composer and the founder of the Armenian national school of music, arranged by award-winning young and promising composer and pianist Kristina Arakelyan and Piano Trio (1945) composed by composer and musicologist Gayane Chebotaryan (1918-1998) one of the prominent woman composers of Armenia.

The Mirak Chamber Music series, is named in memory of John P. Mirak (1907-2000) entrepreneur, philanthropist, community leader, sole benefactor for decades, and late president of the ACF. In line with the Foundation’s mission, the focus of the Series is “on the history of Armenian music in the diaspora and on the role of Armenian women in the nation’s history.” The Series showcases works by international and Armenian composers, with an emphasis on introducing works by Armenian women composers in Armenia and the Diaspora. On occasion, the Series will also feature and promote young and promising performers, and groups and premieres of newly written works.

The concert, free of charge and open to the public, and will be held on December 15 at 8 p.m. on YouTube.