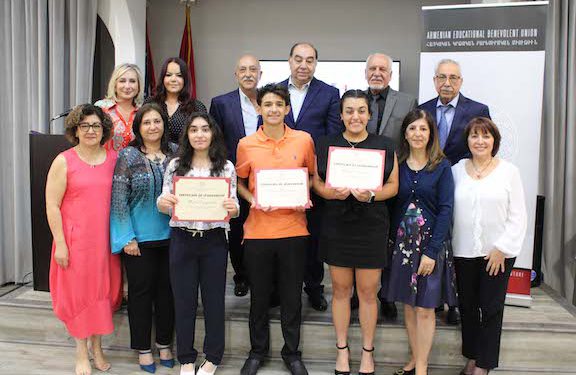 The AEBU Scholarship Fund Committee received a large pool of applications from highly qualified candidates nationwide and from overseas. The selection process was rewarding but very challenging. Five recipients in the United States, two recipients in Armenia, and two recipients in Lebanon were selected.

Recipients in the US were presented with their awards on Sunday, August 14, during a benefit brunch held at the AEBU center in Pasadena, California in the presence of AEBU Scholarship donors, friends, and family members.

Mrs. Katia Kermoyan-Khodanian, committee member and the event’s master of ceremony, welcomed the attendees to the 4th annual scholarship awards ceremony and invited everyone to the beautiful brunch.

The formal ceremony began with a brief history of the mission of the AEBU in general and the Scholarship Fund in specific by Mrs. Kermoyan-Khodanian which was followed by a violin performance by Dikran Melikian, a promising young artist who played Minuets 1 and 2 from Partita No. 3 by Bach.

Dr. Linda Guergerian-Meguerditchain enchanted the attendees with her warm recital of an Armenian poem, ‘Dariners’ (My Years) by Hamo Sahian.

The keynote speech was delivered by Dr. Gagik Melikyan, Professor of Chemistry at the California State University of Northridge. Professor Melikyan shared his insights about the Armenian presence in scientific international communities, and the social/political impact Armenians can have through scientific work and research. Dr. Melikyan addressed many issues and gave us some serious questions to think about and act upon.

Dr. Rosine Der-Tavitian then led the award ceremony. Referring to the AEBU vision to improve lives through education, Dr. Der-Tavitian explained how the Scholarship Fund contributes towards encouraging youth to pursue higher education and giving back through community engagement.

The recipients of the AEBU 2022 to 2023 Scholarship Fund Awards are:

Scholarships will be presented to the selected recipients in Armenia and Lebanon, in the coming weeks, by AEBU local chapters in Yerevan and Beirut.

AEBU Southern California Chapter grants annual scholarships to qualifying undergraduate students of Armenian descent, enrolled at an accredited four-year university across the United States. This year, the scholarship was also available to Armenian students studying in Lebanon and Armenia.

The Armenian Educational Benevolent Union is a California-based charitable organization, exempt from Federal income tax under section 501 (c) (3) of the Internal Revenue Code. Tax ID # 95-3798531. For more information and to donate, please visit the website.

Yerevan Warns of Humanitarian Disaster in Artsakh During Visit to Brussels