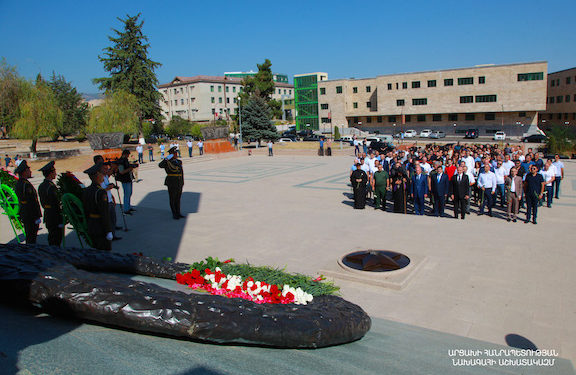 YEREVAN (Azatutyun.am)—Armenian government officials declined to attend on Thursday official ceremonies in Stepanakert to mark the 30th anniversary of the establishment of the Nagorno-Karabakh Republic.

Armenia was represented in the ceremonies instead by a multi-partisan delegation of its parliament led by deputy speaker Ruben Rubinyan.

A government spokesman told RFE/RL’s Armenian Service that Pashinyan did not travel to Karabakh on the occasion because he is currently on vacation.

Armenia’s Minister of High-Tech Industry Vahagn Khachaturyan said, however, that the prime minister and members of his cabinet shunned the low-key celebrations for political considerations.

“A political decision was made Don’t look for other reasons,” Khachaturyan told reporters. He did not elaborate.

Tigran Abrahamyan, an opposition member of the parliamentary delegation visiting Karabakh, deplored the absence of Armenian government officials, saying Pashinyan did not want to anger Azerbaijan.

“If we accept the rules of the game dictated by Azerbaijan we will accelerate and complete the loss of Artsakh (Karabakh),” Abrahamyan said, referring to Armenia’s defeat in last year’s war over Karabakh.

Pashinyan last visited Stepanakert during the six-week war stopped by a Russian-brokered ceasefire in November.

The premier congratulated the Karabakh Armenians on the anniversary of the proclamation of their republic, not recognized by any country, in a statement issued on Thursday. He reiterated that the Karabakh conflict remains unresolved and that Yerevan will continue to champion a settlement based on the Karabakh Armenians’ right to self-determination.

Azerbaijani President Ilham Aliyev has repeatedly stated that Azerbaijan essentially ended the conflict with its victory in the war. He has said that Yerevan should therefore recognize Azerbaijani sovereignty over Karabakh through a “peace treaty” proposed by Baku.

“We would have won had they not discredited and purged our armed forces and replaced experienced commanders with conformists prior to the 44-day war and ineptly managed the war,” he charged.