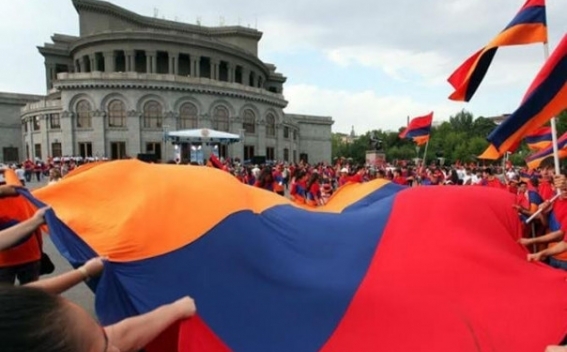 Armenians celebrate independence in Yerevan in 2019

Armenia gained its first and second independence in the 20th century—in 1918 and 1991—during two historical transformations of the world order, with the rise and the fall of the Soviet Union.

Once gaining the upper hand in the Caucasus’, the ancestors of today’s Russia put an end to Armenia’s first independence in 1921 and handed over the region of Nagorno-Karabakh, also known as Artsakh, to the then newly born state of Azerbaijan. Later, in the beginning of the 1990s, the Russian government, losing their status as one of the world powers, paved the way for the revival of Armenia’s independence in 1991—an independence which was born out of great sacrifices made by Armenian heroes.

Today, Armenia’s fate is once again linked to developments pertinent to Russia, especially in the aftermath of the Russia-Ukraine war, which has seen global interventions and repercussions.

The national interests of the Republic of Armenia are in jeopardy amid regional unrest and destructive world anarchy. A world order that undermined if not quashed the strength of regional organizations and alliances, especially those in the vicinity of Armenia, which invigorated and facilitated the recent barbaric aggression against Armenia by Azerbaijan. An aggression devoid of all forms of humanity, that negated the role of Russian peacekeeping forces in Armenian territories and that of the Collective Security Treaty Organization.

Today, the question of whether Armenia’s independence is threatened arises. Or rather, whether the fate of Armenia as a sovereign state and as a nation has become vulnerable and susceptible to vanishing.

The current developments in both Armenia and the entire central and southern Caucasus reconfirms the urgent need for the government of Armenia to reconsider its foreign policies with an emphasis on embracing neutrality and building solid bridges with all small and key actors, regionally and internationally. They must simultaneously keep in mind that the diversity in alliances and active presence of the United Nations best serves as a guarantee for Armenia to preserve its independence and its existence.

The Republic of Armenia today commemorates its independence from the Soviet Union amid destructive world anarchy, while over one hundred of its youth bleed to protect their Homeland.

Despite the ongoing aggressive agendas of several countries neighboring Armenia—not only to usurp Armenian territories, but to annihilate its people—which has brought back the immense fear of atrocities the nation suffered during the Armenian Genocide in 1915, today Armenians worldwide will celebrate the sacrifices made in 1991 to achieve independence.

Armenians in the diaspora are currently accelerating all their efforts to pressure organizations and governments in the countries they reside in to acknowledge and condemn the aggressions against Armenia. They are pouring their efforts towards having the U.N. pass a resolution condemning the aggression and recommending U.N. peacekeeping forces be placed at Armenia’s borders, which will prevent further aggressions.

Although global silence, if not indifference, accompanied the brutal Azeri assault on, first, Artsakh and, later, Armenia, the Republic of Armenia and the Diaspora will continue to peacefully seek the support of all the advocates of truth and justice, whether governments or regional and international organizations, while concurrently strengthening Armenia through consolidating its democracy, uprooting all forms of corruption by its officials and citizens that threaten Armenia’s national interests, and by upgrading the country’s military so that it can properly defend its sovereignty.

*The Ottoman Empire’s losses at Sardarabad, Bash Abaran and Karakilisa staved off the annihilation of the Armenian nation, and the victories were instrumental in allowing the Armenian National Council to declare the independence of the First Republic of Armenia on May 30, 1918 (retroactive to May 28). During September to November 1920, the Red Soviet Army invaded the First Republic of Armenia, Sovietized it. On October 13, 1921, the peace treaty of Kars was signed between Turkey and the three Transcaucasia Republics, including Sovietized Armenia, which reaffirmed the treaty of Moscow between Turkey and Soviet Russia. Ani and Mount Ararat among other Armenian territories were ceded to Turkey to be followed with Stalin granting Nakhchivan and Artsakh to Azerbaijan on July 7, 1923. Almost eight decades later on May 27, 1990, different parts of Sovietized Armenia witnessed confrontations between the newly established Armenian army (NAA) and the Soviet troops. On August 23, 1990, Armenia declared its sovereignty over Soviet laws. On September 21, 1991, Armenia declared its independence and on July 5, 1995, the new constitution of Armenia was adopted and the Second Republic of Armenia was born.

Madeleine Mezagopian is a scholar and an academician based in Amman, Jordan.

Parents of Killed Soldiers ‘Savagely’ Hauled Off by Police