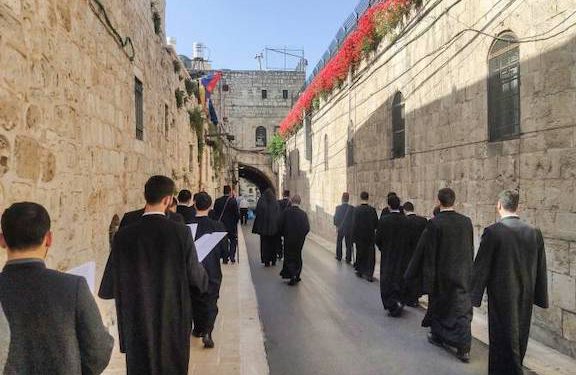 An Armenian priest suffered injuries on Tuesday when he was attacked by a group of Jewish youth in Jerusalem.

According to the Armenian Patriarchate of Jerusalem, Reverend Arbak Sarukhanian was attacked by a group of young Jews when he was walking toward the Church of the Holy Sepulcher in Jerusalem on Tuesday.

Rev. Koryun Baghdasarian, Chancellor at Armenian Patriarchate of Jerusalem, said that Sarukhanian was injured in the attack. He was rushed to hospital and was discharged after receiving the necessary treatment.

The Patriarchate has filed a formal complaint with the police, after which three of the attackers were arrested.

The Patriarchate demands that the police conduct a fair investigation and punish the perpetrators in compliance with the law, in order to avoid a recurrence of such incidents in the future.

“We demand that law enforcement conducts a fair investigation and that the perpetrators are punished in accordance with the law in order to avoid a recurrence of such incidents in the future,’’ Rev. Baghdasarian said in a statement.