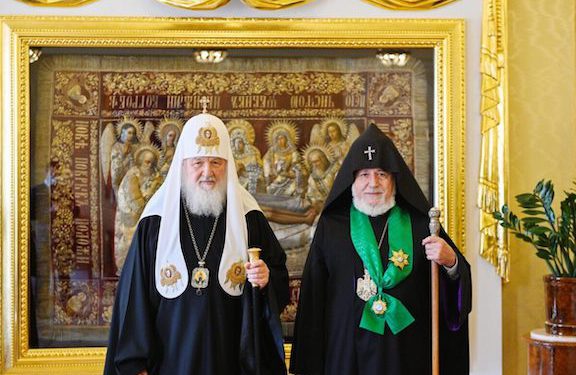 Head of the Russian Orthodox Church Patriarch Kiril I (left) met with Karekin II, Catholicos of All Armenians in Moscow on Oct. 12

The leaders of the Armenian Apostolic Church and Russia’s Orthodox Church met on Tuesday in Moscow and discussed efforts for a peaceful solution to the Karabakh conflict, as well as the repercussions of the war in Artsakh last year.

Karekin II, Catholicos of All Armenians and Patriarch Patriarch Kirill I the Patriarch of Moscow and All Russia discussed the 44-Day War and the ensuing crisis, and touched on ways the two churches can play a role in diffusing tensions and advancing peace and stability in the region.

Catholicos Karekin II affirmed the strong and centuries-old bod between Armenia and Russia, which, he said, have stayed strong during most complex and difficult situations.

“The centuries-old friendship of our peoples and Churches has been expressed in moments of both joy and sorrow. We have rejoiced at our joint achievements and worked together to preserve our friendship and brotherhood. And our meetings with Your Holiness are the best proof of that. We have always felt the support of the head of the Russian Orthodox Church,” said Karekin II.

Touching upon the Artsakh war and post-war issues, Karekin II expressed gratitude to the Russian Church and its leader for their support to the Armenian Church and the people in that difficult period.

“Today, as Your Holiness knows, our country and people are living difficult times. However, we believe that with God’s help, thanks to our faith, as well as with the support of friendly countries, first of all, the Russian Federation, we will be able to overcome this ordeal,” Karekin II told Kiril I.

At the conclusion of the meeting, Patriarch Kirill I awarded the Catholicos Karekin II the “Order of Glory and Honor” of the Russian Orthodox Church, on the occasion of his 70th birthday and for his contribution to the development of friendly relations between the Armenian Apostolic Church and the Moscow Patriarchate.

“We consider this gift as a sign of Your Holiness’ respect and love for our people and the Church,” said Karekin II in thanking Kiril I.

Earlier on Tuesday, in a meeting Azerbaijan’s religious leader of Azerbaijan, Allahshokur Pashazadeh, Kiril I said that dominant political factors are complicating negotiations for the settlement of the Karabakh conflict, TASS reported.

“Today we have to discuss very difficult issues, which are on the agenda of religious leaders, but still have different dimensions, including political ones. Among them, when it comes to overcoming the military conflict, there is a political factor. Sometimes, when that factor is very prevalent, negotiations become difficult,’’ Kiril I told Pashazadeh.

Kiril I explained that religious leaders have an advantage in discussing complex issues, because of their common ground as being guided by God.

“Our faith in God and our value system are moral, there is trust in each other, it certainly creates a very favorable environment,” Kiril I added.

Karekin II, Kiril I and Pashazadeh are scheduled to meet to discuss the Karabakh conflict on Wednesday.