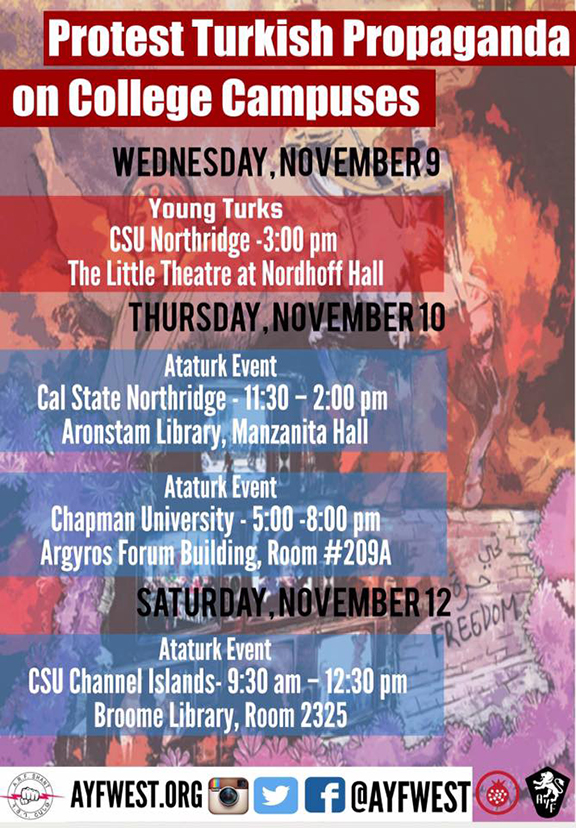 GLENDALE—The Turkish Cultural Foundation, Association of Turkish Americans of Southern California, and Ataturk Monument in Los Angeles (ATAMLA) have planned a series of events around Southern California in celebration of “Ataturk Week” on November 9–13, 2016. The events will feature a lecture by Professor George Gawrych titled, “The Young Ataturk: From Ottoman Soldier to Statesman of Turkey.” Gawrych is a Professor of History at Baylor University in Texas, specializing in the late Ottoman Empire and modern military history.
Turkey is in crisis today while propaganda events such as these serve to paint a rosy picture of Turkey. Earlier this week, Armenian, Kurdish, Yezidi and human rights organizations released a joint statement expressing outrage at the arbitrary arrests of Turkey’s opposition Peoples’ Democratic Party (HDP) co-leaders Selahattin Demirtas and Figen Yuksekdag, and its 10 MPs on November 4, 2016, and thousands of others in a dictatorial coup by President Erdogan: Please sign and share the #FreeHDPnow petition.
The ARF Shant Student Association, Armenian Youth Federation-Western Region, and the All-Armenian Student Association would like to stress the importance of the Armenian community’s attendance at these events. In order to refute historical falsification, we need to bear witness to such claims and be present to correct such misrepresentations. Our presence at these events will send a clear message to the Turkish community that college and university campuses are not incubators for denialists. Treating college campuses as breeding grounds for Turkish nationalist ideology is offensive for the number of Armenian students who attend these colleges.
The schedule is as follows:
Thursday, November 10, 2016
Cal State Northridge (Northridge, CA)
12:30 – 2:00 pm
Aronstam Library, Manzanita Hall
Thursday, November 10, 2016
Chapman University (Orange, CA)
6:00 -8:00 pm
1 University Drive, Orange, CA 92866
Argyros Forum Building, Room #209A
Saturday, November 12, 2015
CSU Channel Islands (Camarillo, CA)
10:30 am – 12:30 pm
1 University Drive, Camarillo, CA 93012
Broome Library, Room 2325
Additionally, ARF-SSA, AYF-WR, and the All-ASA will be attending a live panel broadcast of the unfortunately named “The Young Turks on Fusion” election-focused show on November 9, 2016. The hosts of “The Young Turks” will discuss the elections and what the selection will hold for the nation. The Armenian student groups find offense in the insensitive use of “Young Turks” as the title of the show, effectively giving credence to a murderous and genocidal regime that planned and executed the Armenian Genocide.
Wednesday, November 9, 2016
The Young Turks on Fusion Live Broadcast
CSU Northridge – The Little Theatre at Nordhoff Hall (18111 Nordhoff Street, Northridge, CA 91330)
5:00 pm
Tickets are free, but required.
For more information, please send the ARF Shant Student Association an e-mail at Shant.Gomideh@arfwus.org.