Armenian, Turkish Envoys to Meet on January 14 in Moscow 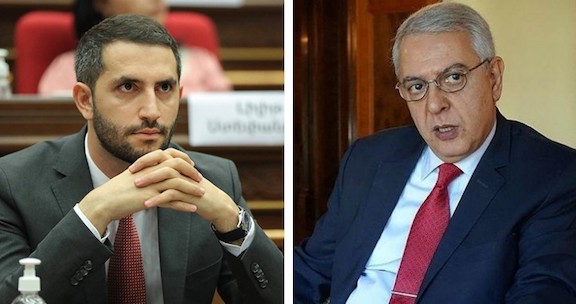 Special envoys appointed by Ankara and Yerevan to negotiate the normalization of relations between Armenia and Turkey are scheduled to meet in Moscow on January 14, Armenia’s Foreign Ministry spokesperson Vahan Hunanyan reported on Wednesday.

Armenian announced last week that it had appointed the chairman of the parliament’s foreign affairs committee, Ruben Rubinyan as its special envoy. Rubinyan is a close ally of Prime Minister Nikol Pashinyan and a leader of his Civil Contract party.

Turkey announced last month that its special envoy will be its former Ambassador to the United States, the notorious Armenian Genocide denier Serdar Kilic.

During a December 24 press conference, Pashinyan said that Armenia is entering normalization talks with Turkey without any preconditions.

From the onset of this renewed process, Ankara has place preconditions on talks, among them calling on Armenia to recognize Azerbaijan’s territorial integrity that includes Artsakh, as well as push for the opening of a corridor linking mainland Azerbaijan with Nakhichevan through Armenia. This is the so-called “Zangezur Corridor” scheme laid out by Azerbaijan’s President Ilham Aliyev.

Despite numerous rejection of such a corridor by Yerevan, the leaders of Turkey and Azerbaijan continue to tout it as an important aspect for opening up regional transit links.

Moscow, which has touted this new round of normalization talks, has gone on record to say that any opening of transit links in the region must respect the sovereignty and the territorial integrity of the country through which the roads and other transport links pass.

Earlier this week, the vice-president of Turkey’s ruling Justice and Development party (AKP) said that it was the wish of President Recep Tayyip Erdogan that the issue of the Armenian Genocide be left to historians and called on other nations to end efforts to recognize the events of 1915 as Genocide.