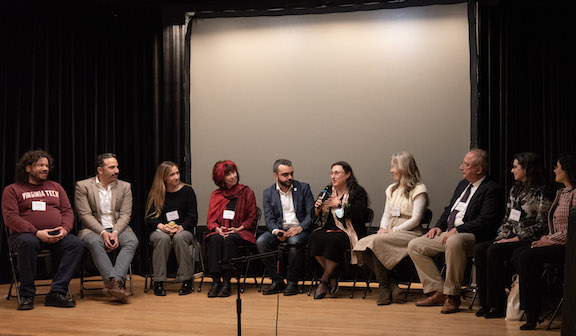 Armenians of Colorado hosted a dinner reception and panel discussion for the Society for Armenian Studies attending the 56th annual meeting of the Middle East Studies Association in Denver on December 2. Photo by M. Ginosyan Photography

Denver, CO—During the 56th annual meeting of the Middle East Studies Association in Denver, Armenians of Colorado hosted members of the Society for Armenian Studies and other scholars of related fields for a dinner reception and panel discussion at the First Baptist Church of Denver.

“Our community was honored to host and hear from Armenian and non-Armenian scholars from across the USA,” remarked AOC Board President Byuzand Yeremyan. “Especially in the aftermath of the 2020 Artsakh War, it is very important for the community at large, especially our youth, to learn from and interact with scholars of Armenian Studies and related fields,” continued Yeremyan.

Following a welcome message from Yeremyan, who thanked event supporters House of Bread, Kalita Grill, and the Sergoyan family, SAS and AOC member Simon Maghakyan read a statement on behalf of SAS President Christina Maranci, who is also the Mesrob Mashtots Chair in Armenian Studies at Harvard University.

“SAS is very pleased and honored to welcome scholars through Armenians of Colorado’s generous hospitality,” remarked Maranci. “We thank the AOC team, under the leadership of Mr. Yeremyan, for the successful event, and extend our deepest appreciation to each and every scholar that contributes to the field of Armenian studies,” continued Maranci.

After dinner, the scholars participated in a panel discussion, moderated by Maghakyan, during which they introduced themselves and their ongoing research.

During Q&A, community members posed questions to the scholars. Long-time AOC member Jirair Christianian, who is also a SAS member, inquired whether the 2020 Artsakh War has impacted collaboration among Armenian and Turkish scholars. The question was responded to by Watenpaugh and Günhan who mentioned that, in practice, the collaboration has stayed relatively the same, despite some initial hesitation to conduct field research immediately after the war. Watenpaugh noted that gone are the days when genocide denial was widespread in academia and also expressed regret that there is no communication between Armenian and Azerbaijani scholars.

Responding to a question from AOC member, economist, and author Yeva Aleksanyan, Simsarian Dolan further elaborated on his research into the history of Armenian visibility in the USA. The scholar noted that on some occasions Armenians have had brief hypervisibility in the USA, particularly in the aftermath of the Armenian Genocide, but that, in general, Armenian representation is either missing in the USA or is a caricature, as is the case today in Hollywood portrayals of Armenians in stigmas of either extremely successful celebrities, like the Kardashians, or organized crime members.

Another question from a young audience member sought clarification on efforts for Armenian student outreach, prompting several responses from panel members as to the role of scholarship in the society that also included insights into different researchers’ own experiences and research endeavors. The panel discussions also highlighted new publications, in particular Bertram’s “A House in the Homeland: Armenian Pilgrimages to Places of Ancestral Memory,” released by Stanford University Press in April.

Armenians of Colorado (AOC) was founded in 1979 and shortly thereafter incorporated as a 501(c)3 non-profit cultural organization. Its purpose is to create a cohesive Armenian community and to further the understanding of Armenian history, culture, language, customs, and heritage. AOC actively supports issues and concerns of the Armenian-American community in Colorado as well as those identified within the Armenian Diaspora throughout the world.

The Society for Armenian Studies is an international body, composed of scholars and students, whose aims are to promote the study of Armenian culture and society, including history, language, literature and social, political and economic questions; to facilitate the exchange of scholarly information pertaining to Armenian studies around the world; and to sponsor panels and conferences on Armenian studies.

After Covid-Related Delays, Board of Regents Hosts School-Wide Conference