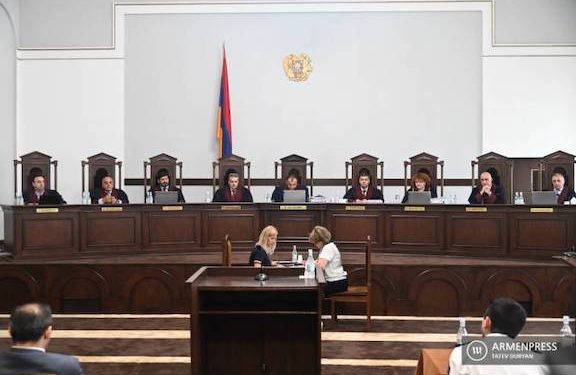 The court upheld the vote results in response to separate appeals lodged by opposition alliances led by former Presidents Robert Kocharian and Serzh Sarkisian and two smaller groups that failed to win any seats in the Armenian parliament.

The four opposition forces alleged serious irregularities which seriously affected the election outcome. In particular, they accused Pashinyan of abusing his government levers, bullying opposition activists and resorting to “hate speech” during the election campaign and forcing military and security personnel to vote for his ruling Civil Contract party.

Opposition representatives presented what they called evidence of the alleged violations during court hearings on the appeals that began on July 9 and lasted for six days.

The Constitutional Court also questioned representatives of the Central Election Commission, the Armenian government and Pashinyan’s Civil Contract party. They all dismissed the opposition allegations as baseless.

Pashinyan and his political allies maintain that the snap elections were free and fair, pointing to their largely positive assessment by European election observers. The latter concluded in a preliminary report that the vote was “competitive and generally very well-managed.”

The court’s refusal to cancel the vote results was announced by its chairman, Arman Dilanyan. He said the ruling will be fully publicized in due course.

It was not immediately clear whether all of the court’s nine judges agreed with the decision. Five of them, including Dilanyan, took the bench after the 2018 “velvet revolution” that brought Pashinyan to power.

Representatives of Kocharian’s Hayastan alliance and Sarkisian’s Pativ Unem bloc said they expected such a ruling. They claimed that it was handed down under strong government pressure.

According to the CEC, Pashinyan’s party won 53.9 percent of the vote, followed by Hayastan that got just over 21 percent. Pativ Unem came in a distant third with 5.2 percent.
None of the 22 other parties and blocs that participated in the polls did well enough to be represented in the new National Assembly.

Citing a complex legal formula, the CEC has given 71 parliament seats to Civil Contract, compared with 29 and 7 seats to be held by Hayastan and Pativ Unem respectively.

The two opposition forces challenged not only the official results but also the distribution of the 107 parliament seats, saying that it unfairly benefits the ruling party.