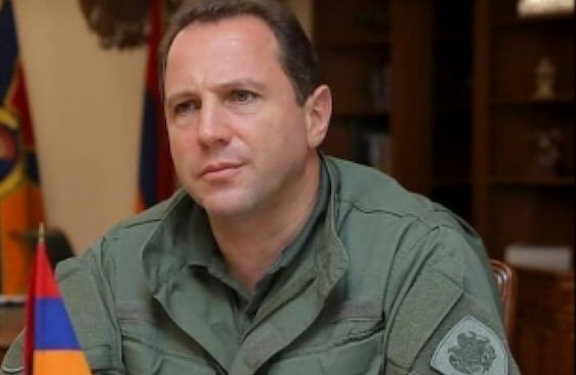 In a statement, the NSS said that Tonoyan and Davit Galstyan, an arms dealer also arrested late on Wednesday, are accused of fraud and embezzlement that cost the state almost 2.3 billion drams ($4.7 million).

Courts in Yerevan were due to hold hearings later in the day on arrest warrants for the two men sought by the NSS. A lawyer for Galstyan told reporters that his client denies the accusations.

Galstyan owns several firms that have for years sold weapons and ammunition to the Armenian military. He was already arrested in February on charges of supplying the military with unusable artillery shells worth $1 million. Armenia’s Court of Appeals released the businessman reputedly close to Tonoyan from custody four months later.

It was not immediately clear whether or not Tonoyan, who served as defense minister from 2018-2020, will plead guilty to the accusations.

The NSS statement said that criminal proceedings have also been launched against other serving and retired military officials as part of “large-scale operational-investigative measures” taken by its investigators. It did not name those officials.

A deputy chief of the Armenian army’s General Staff, Lieutenant-General Stepan Galstyan, was summoned to the NSS for questioning late on Wednesday. According to the Hraparak newspaper, investigators searched his and Tonoyan’s apartments.

In what appears to be a related development, the NSS also arrested late last week the commander of Armenia’s Air Force. It claimed that the general abused his powers to arrange for personal gain a $4.7 million contract for the supply of outdated rockets to the armed forces.

According to the security service, the Defense Ministry had refused to buy the same batch of rockets from a private intermediary in 2011.

Tonoyan had served as a deputy defense minister and minister of emergencies during Sarkisian’s rule. In April 2018, one of Pashinyan’s close associates, Ararat Mirzoyan, described him as a “real professional” and “person of integrity” who will quickly modernize the Armenian army.

Tonoyan was sacked in November 2020 less than two weeks after a Russian-brokered agreement stopped the Armenian-Azerbaijani war over Nagorno-Karabakh. Some senior pro-Pashinyan parliamentarians blamed him for Armenia’s defeat in the six-week war. The prime minister faced angry opposition demonstrations and fought for his political survival at the time.

Later in November, the then chief of the army staff, Colonel-General Onik Gasparyan, said four days after the outbreak of the war he warned Armenia’s political leadership to urgently reach a truce agreement with Azerbaijan to halt the hostilities. Pashinyan subsequently denied Gasparyan’s claim.

However, Tonoyan not only confirmed the warning issued by the army top brass but also said that it was “agreed with me.”