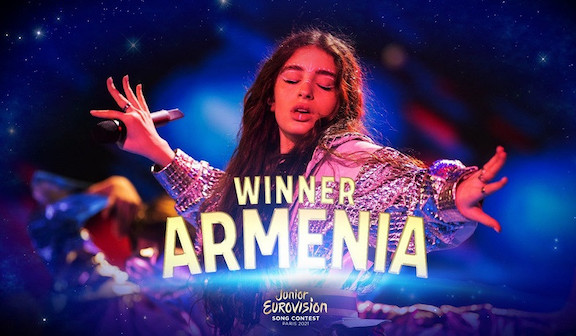 In total, 19 countries participated under the slogan “Imagine.” Maléna’s win is the second victory for Armenia at a Junior Eurovision Song Contest.

The show was broadcast live from La Seine Musicale in Paris and was hosted by Carla Lazzari, Élodie Gossuin, and Olivier Minne.

Armenia’s Maléna was crowned winner based on voting from national juries in all 19 competing countries. For the fifth time ever, viewers from around the world were also given the opportunity to vote for their favorite songs. Participants interested in voting did so by voting online before the show, where the voting was based on snippets of rehearsal, as well as online voting during the show, where the viewers could cast their votes 15 minutes after the last performance.

The national juries and the online voting each determined 50 percent of the result.

In 2018, Maléna took part in the Armenian national selection for the 2018 Junior Eurovision Song Contest with the song “Par.” She finished 8th in the semi-finals.