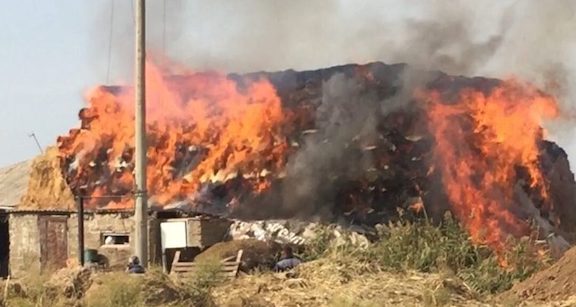 The Yeraskh region of Armenia’s Ararat Province has been under “day and night attack” by Azerbaijani forces who are shooting from positions in Nakhichevan, warned Armenia’s Human Rights Defender’s Office.

In a statement, the Human Rights Defender’s Office reported ongoing shelling in Yeraskh on Friday, adding that Azerbaijani forces set ablaze 8,000 stacks of dried grass, stockpiled for use in the winter months to feed livestock. The fire spread to the roof of a nearby residence. Firefighters were able to extinguish the residential fire, preventing further structural damage.

Armenia’s Human Rights Defender was alerted to the situation by residents who contacted his office, sounding the alarm on the escalating situation.

“Taking into consideration that the Azerbaijani positions are located in the immediate vicinity of the village, it is evident to the Azerbaijani servicemen know that their actions are harming residents, destroying their property and violating their rights to life and property,” the Human Rights Defender’s office said.

“The process of creating a demilitarized security zone around the borders of Armenia with Azerbaijan and the removal of the Azerbaijani armed forces form the vicinity of the villages and from the roads between the communities of Armenia should start immediately,” urged the Human Rights Defender’s office, whose proposal was included in a resolution passed on September 27 by the Parliamentary Assembly of the Council of Europe.

“It is evident that the basis of these criminal harassments and the gross violations of human rights is the same: The policy of Armenophobia and enmity, and of ethnic cleansing and genocide by the Azerbaijani authorities,” said the Human Rights Defender’s office. “This policy has institutional roots, and until the perpetrators are punished, the violations will not end, and the security of the people will not be guaranteed.”