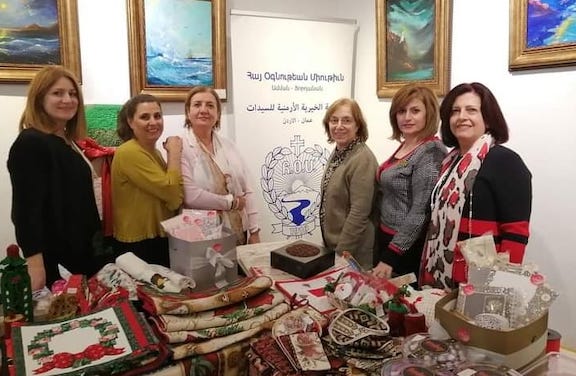 Members of the ARS in Jordan

In the early years of the 20th century, Khachatur Malumian, an Armenian intellectual and martyr of the Armenian Genocide, was impressed with the ongoing endeavors of the women in Armenia, who attended to the needs of the most vulnerable members of society under the umbrella of the Red Cross.

Motivated by this great contribution, Malumian initiated a project in the United States to enrich the lives of Diasporan Armenian women by actively working to enhance education, health, and social services, while preserving the Armenian identity. Thus, the Armenian Relief Society, very much interconnected with the original concept of the Armenian Red Cross, was born – spreading first throughout the U.S. and Canada and subsequently wherever Armenian Diasporas were born, including Jordan where the ARS opened a chapter in 1946.

Today, Armenians in both the Homeland and the Diaspora are still facing many challenges. As a result of the socioeconomic and political challenges being faced, the ARS have doubled their efforts – organizing programs and activities, and using diverse social media tools, which have increased community engagement.

In October, Armenian scholars and intellectuals met in Yerevan to discuss how to best promote the interests of Armenia and the region at large. Simultaneously, members of the ARS in Jordan had their annual meeting in Amman to reelect their board and reflect on current activities. During their meeting they discussed youth outreach programs, emphasizing the importance of finding ways for Armenian youth to use their skills for the betterment of the Homeland and Diaspora.

The Covid-19 pandemic and the accompanying restrictions did not hinder the work of the ARS in Jordan. Members of the chapter continued to organize, providing aid to the most vulnerable members of the local Armenian community while building solidarity between their own community, the Armenian Diaspora, and the Homeland.

During this last year, the ARS in Jordan provided aid to Armenians in Lebanon and Artsakh. They initiated programs to alleviate the suffering of Lebanese Armenians who, until today, have been struggling with the financial crisis and accompanying devastations in Lebanon, as well as for individuals and families who were wounded, killed, or displaced as a result of the 2020 Artsakh War.

The ARS in Jordan firmly believes that interacting with the Armenian youth and providing opportunities for them to serve their communities in the Diaspora and in the Homeland is of utmost importance. They are determined to recruit Armenian youth, so that each can contribute their own skills to the organization’s efforts in promoting the Armenian identity and serving the needs of the most vulnerable members of our communities – an approach that should be considered by all ARS branches worldwide.

The past and the current activities of the ARS in Jordan well represent a much-needed Armenian solidarity, which was and will remain the best path to preserving and strengthening the Armenian identity, the Homeland, and the legacy of Khachatur Malmulian.

Madeleine M. Mezagopian is a scholar and an academician based in Amman, Jordan.