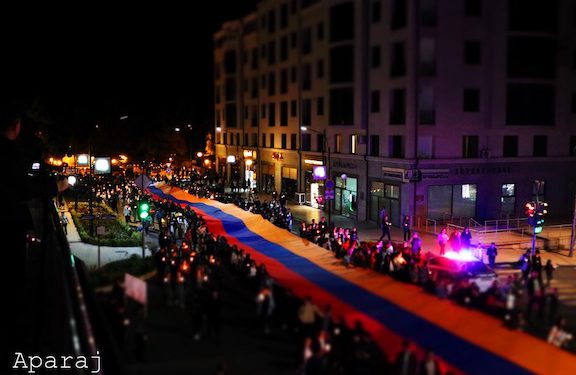 Monday marked the first anniversary of the start of the 44-Day War, with official events marking Azerbaijan’s and Turkey’s aggressive attack on Artsakh on September 27, 2020.

Commemorative ceremonies kicked off on Sunday, with memorial processions taking place in Stepanakert, Yerevan and Gyumri.

Thousands of Artsakh residents turned out for the march in Stepanakert under the banner of “Artsakh is Alive.” Ahead of the march a requiem service took place in the city’s St. James (Sourp Hakop) church.

From various corners of Stepanakert people joined the procession carrying the names of the regions of Artsakh that are currently under Azerbaijani occupation. The marchers gathered at the city’s memorial park, where they paid their respects to the fallen soldiers.

The procession of torches in Yerevan kicked off in Karekin Njdeh Square and continued to the Holy Cross Cathedral, from where the thousands of participants headed to the Yerablur National and Military Cemetery.

The procession, which was organized by the parliamentary Armenia Alliance.

The silent procession was punctuated by the reading of the names of the fallen heroes from a bullhorn, until the crowd reached Yerablur, where a memorial prayer took place and the torches were placed in front of the fallen soldiers’ graves.

In Gyumri, a similar march took place, organized the Armenian Revolutionary Federation Youth Organization of Armenia. The participants began the procession from Gyumri’s Independence Plaza toward the Shirak Cemetery.

“This is march of unity whose main objective is to pay tribute to the memory of our heroes who were martyred during the war, and to also demonstrate that we remain true to our demands and we will not retreat,” said ARF Shirak chapter chairman Mher Melkonyan.

Following a prayer service at the Shirak cemetery, the participants lit candles and placed flowers.