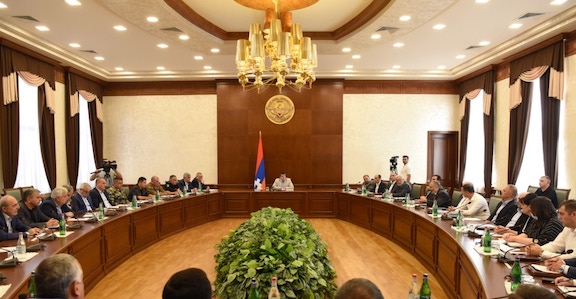 A special session of the Artsakh Security Council was held on Oct. 3

Artsakh’s National Security Council met on Monday to discuss the recent developments in the region, especially discussions underway between Armenia and Azerbaijan regarding a so-called “peace treaty.”

The expanded session of the security council, chaired by Artsakh President Arayik Harutyunyan, included the participation of high-ranking officials, leaders of factions represented in Artsakh’s National Assembly and the Primate of the Artsakh Diocese.

Following the meeting, a lengthy statement was adopted specifically voicing concerns about the ongoing “peace talks” between Armenia and Azerbaijan and asserting that the international community should continue its efforts to mediate a settlement of the Karabakh conflict, including addressing Artsakh’s status.

Concerned by the serious challenges caused by current developments in the world and in our region;

Reaffirming the positions of the Artsakh Republic executive and legislative power branches regarding the future of Artsakh;

Referring to the September 19 address of the Artsakh Republic President; and

Considering the new developments following it, in particular, concerns of our public regarding some of the thoughts and views expressed in the interview of the Premier of the Republic of Armenia given to the Armenian Public Television on September 30.

We, the participants of the expanded meeting of the Security Council of the Artsakh Republic, declare:

We record that as a result of the Turkish-Azerbaijani aggression of 2020 and the subsequent two-year military-political developments, we actually have a situation where Azerbaijan, with Turkey’s unconditional support, has gained influential leverage and is aggressively using them to realize its most ambitious aspirations. Azerbaijan’s actions are accompanied by consistent use of force and threat of force, aggravating manifestations of the Armenophobic state policy, and other gross violations of the fundamental norms of international law. Using all the levers, Azerbaijan strives to ensure its oppressive and dictating position not only in relations with the Republic of Armenia, but also to abort any format and efforts for the settlement of the Karabakh conflict, declaring that it has solved the problem by war. Contrary to that, the OSCE Minsk Group co-chair countries and other international actors have reaffirmed by different formulations the existence of the conflict and the need for its comprehensive settlement.

The position of the Artsakh Republic has always been clear: the Karabakh conflict should be settled on the basis of the full and non-negotiable recognition of the right of the people of Artsakh to self-determination and the results of its realization. It is undeniable that in 1991 the people of Artsakh declared independence in conformity with the norms of international law and USSR legislation, and Artsakh has never been part of independent Azerbaijan. Furthermore, the fact that the Artsakh Republic is not recognized internationally does not mean that the people of Artsakh have no natural rights and the Artsakh Republic does not exist. Despite all the difficulties and challenges, from now on we will continue our chosen path towards determining and managing our own destiny in our own homeland.

The long-term and stable security of Artsakh should be ensured through our own defense capacities, the indefinite mission of Russian peacekeepers, and all possible tools of the Republic of Armenia. Improving our own defense capacities is an ongoing effort and is in the spotlight of our attention. The Russian peacekeeping mission, despite the additional challenges of recent months, continues to be the main international guarantee of the security of the people of Artsakh. Within this context, we consider the attempts to worsen traditional relations with natural allies as extremely dangerous.

The Artsakh Republic and the Artsakh Armenians stand by the statehood and people of Mother Armenia in overcoming all vital challenges, because it has been stipulated by our national values and interests. We perceive that the possible signing of an interstate agreement regulating the Armenia-Azerbaijan relations can become an important basis for guaranteeing the sovereign and safe future of the Republic of Armenia, regional stability and peace. However, taking into account the importance of the interests of the Artsakh Armenians, as an inseparable part of the Armenian people, in these relations, we emphasize that any document that may ignore the existence of the Karabakh conflict, undermine the prospect of its fair settlement, and limit the possibilities of international recognition of the right of the Artsakh people to self-determination and the results of its implementation is unacceptable for us, including the false agenda of its subordination to the principle of territorial integrity. Within this context, we highlight the periodic consultations between the authorities of the Artsakh Republic and the Republic of Armenia on the topic, within the framework of which the Prime Minister of the Republic of Armenia presents details of international negotiations to the Artsakh Republic President, and the President, in his turn, presents the positions of the Artsakh Republic authorities, including their disagreements.

During the past three decades, both the logic and the practical steps of the Armenian people’s national-liberation struggle and state-building process were based on consolidating the pan-Armenian potential and directing the political support of our friends and allies in the right direction. Taking into account the positive experience of the past, the best guarantee for overcoming these difficult challenges faced by the Armenian people is the manifestation of national unity. We have always appreciated the consistent support of the entire Armenian people and the Republic of Armenia to the Artsakh Republic, without which we could not have recorded numerous important successes in our struggle. In that sense, there is simply no alternative to maintaining and cementing the Armenia-Artsakh-Diaspora trinity. Our national values and interests imply that regardless of anything, Mother Armenia should always be next to Artsakh in all spheres, especially in terms of guaranteeing the security of the people of Artsakh and international recognition of the right to self-determination.

It is undeniable that the beneficiary of the future of Artsakh is the entire Armenian people, and the interests of Armenia and Artsakh should be seen as a single whole. Considering especially the post-war context and challenges, we highlight that as long as the Artsakh Republic is not included in the conflict resolution process as a full-fledged member and within the framework of a high international format, the Republic of Armenia is obliged and authorized to represent and protect the rights and interests of the people of Artsakh on international platforms. Those obligations and powers are fixed by a number of internal and international documents, including the OSCE documents and the tripartite declaration of November 9, 2020. Hence, we are ready to conduct negotiations with Azerbaijan on the settlement of the conflict, in case of restoration of the full-fledged format of negotiations, where the Artsakh Republic is recognized as a full party.

The authorities of the Artsakh Republic will continue to follow the geopolitical and regional developments, taking appropriate steps to manage the risks arising from the situation.