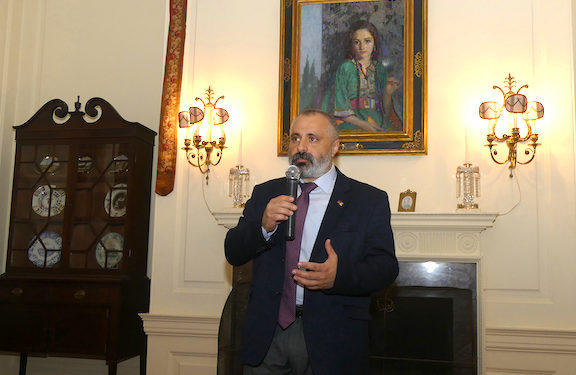 WASHINGTON—Artsakh Republic Foreign Minister Davit Babayan, in an address that spoke to global diasporan and diplomatic support for Artsakh’s security and sovereignty, invoked the legacy of President Woodrow Wilson and his concern for “the fate of small nations – nations under the threat of extermination.”

Minister Babayan’s remarks were made at an Armenian National Committee of America dinner reception dedicated to Artsakh’s security and liberty, held at Washington’s historic Woodrow Wilson House on Saturday.

Babayan is visiting the United States at the invitation of the ANCA-Western Western Region to participate in its Grassroots Conference on Saturday, September 24. He will receive the organization’s “Freedom Award” during the ANCA-WR Banquet on Sunday, September 25.

Saturday’s dinner followed a day-long strategic dialogue with ANCA leaders, from across the United States, gathered in Washington, DC for the ANCA’s Federal Policy Seminar. Foreign Minister Babayan will, on Monday, begin a three-day series of Congressional consultations, think tank briefings, university lectures, media interviews, church visits, and community meetings. He will offer keynote remarks on Monday, September 19th at the Capitol Hill Salute to Artsakh’s Independence, a community event on Capitol Hill that is being organized in cooperation with the Congressional Armenian Caucus.

The historic Woodrow Wilson House, a museum honoring the U.S. President who championed efforts to secure a US mandate to support the Armenian Republic in 1918, served as a fitting setting for the Minister’s address. He was joined in speaking by Artsakh Deputy Minister of Culture, Education, Science, and Sports Lernik Hovanessian and international human rights lawyer Siranush Sahakyan.

As a diplomat and legal scholar, Babayan has penned hundreds of articles on the plight of Armenians in Artsakh and the need for international recognition and intervention in the name of human rights. He has also published reports on the Karabakh-Azerbaijan negotiation processes. Determined to extend a hand in order to embrace and empower Armenians from across the Diaspora to understand the importance of defending Artsakh’s democratic future, Babayan will discuss his experiences during and in the wake of the 44 Day War and the next steps needed to preserve the security of Armenians in Artsakh for years to come.

Babayan was born in Stepanakert, the capital of Artsakh. He was appointed foreign minister of the republic for a second time in January 2021, prior to which was Artsakh’s presidential spokesperson since 2007. He also served as an adviser to the president of Artsakh from 2005 to 2007. He is the founding leader of the “Artsakh Conservative Party.”