Artsakh Must Have Direct Border with Armenia, Says Beglaryan 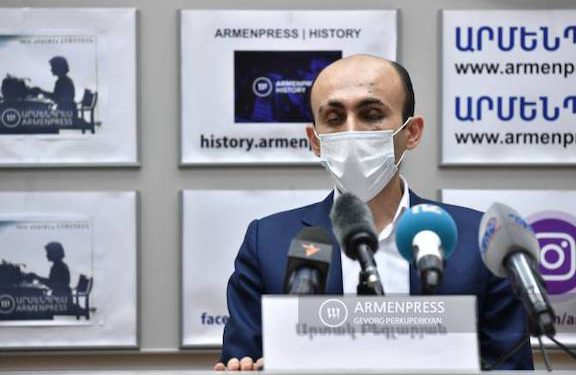 Artsakh must have a direct and uncontrolled border with Armenia and the Lachin Corridor cannot come under Azerbaijani control, Artsakh State Minister Artak Beglaryan said on Tuesday.

Beglaryan was responding to a statement made earlier in the day by Azerbaijan’s President Ilham Aliyev, who told reporters after a meeting with NATO Secretary-General Jens Stoltenberg that his so-called “Zangezur Corridor” should have the same status as Lachin.

Beglaryan said in a Twitter post that the issue of the Lachin Corridor has nothing to do with current talks underway between the representatives of Armenia, Azerbaijan and Russia on opening transit and other communications routes between Armenia and Azerbaijan.

He also stressed that territories under occupation by Azerbaijan must be returned.

Beglaryan on Friday called for investigative mechanisms to be installed at the line-of-contact between Artsakh and Azerbaijan, following another shooting by Azerbaijani forces on Artsakh positions.

“Azerbaijan deliberately and regularly is provoking incidents in the line of contact with Artsakh in order to keep the population in fear and force them to leave,” Beglaryan said at a press conference organized by Armenpress in Yerevan on Friday, adding that the people of Artsakh have a strong ability to resist, and efforts are underway to improve the security guarantees.

“We still have a lot to do. Before the war, the line of contact with Azerbaijan was around 200 kilometers long, but now it is 500 kilometers [310 miles], most of which is a new frontline. Another problem is that the positions of the Azerbaijani armed forces are close to our settlements. We have publicly proposed that the armed forces must be far from the settlements. This should be discussed by the international partners and mediators,” Beglaryan explained.

The investigative mechanisms are very important, but are very weak, he said. “I think here all international partners and mediators need to act”, he stated.

Commenting on the recent incidents of killing of Artsakh residents by the Azerbaijani forces, Beglaryan said that Azerbaijan did not even provide the name of the culprit of the latest incident in Shushi neither to the Artsakh authorities nor to the Russian peacekeepers.

“The Karabakh conflict must be solved with peaceful means based on the unconditional recognition of our rights, the people’s right to self-determination, the international recognition of the independence and the return of the occupied territories. These are the red lines for the Armenians of Artsakh, Armenia and all over the world,” added Beglaryan, who was addressing the press on the 30th anniversary of Artsakh’s independence referendum.

Beglaryan said it is obvious that the conflict will not have a quick solution given Azerbaijan’s non-constrictive behavior. Artsakh, he said, wants that international security guarantees, including the presence of the peacekeepers to not have term limits, until a final settlement of the conflict.