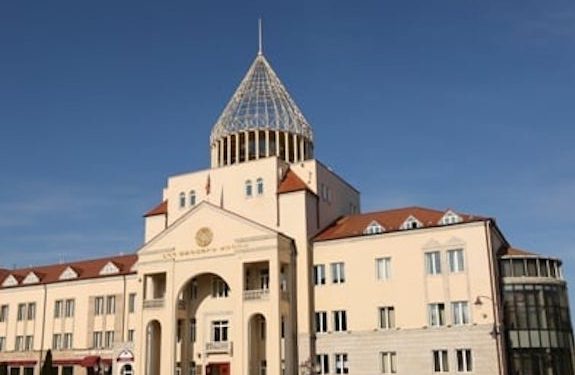 The four factions in Artsakh’s parliament issued a statement voicing their collective chagrin with President of the European Council Charles Michel, whom they claim is distorting the “essence of the Karabakh conflict settlement” and the processes that have taken place during the past 30 years that ensured, among other things, Artsakh’s right to self-determination.

Michel issued a statement Monday summing up the results of a meeting he hosted with Prime Minister Nikol Pashinyan and President Ilham Aliyev of Azerbaijan, who agreed to fast track discussion on the demarcation and elimination of the borders between the two countries, as well as the so-called “peace talks” that recently have dominated the discourse around the Karabakh conflict settlement issue.

“The unified position of the people and authorities of Artsakh was presented in a statement by the [Artsakh] National Assembly dated April 14 of this year, thereby confirming that the agenda of discussions and negotiations held through international institutions were acceptable to us only if they they correspond to the provisions laid out waiting the said statement,” explains the Artsakh parliamentary blocs.

“Charles Michel’s statement on the results of the recent trilateral meeting in Brussels is baffling since it distorts the essence of the settlement of the Karabakh conflict and its legacy accumulated over 30 years through the negotiation processes,” the statement emphasized.

“For the first time in the negotiation discourse, an attempt is being made to abandon the political and geographical concept of ‘Nagorno-Karabakh’ and the phrase ‘ethnic Armenian population of Karabakh’ has been introduced. All this is completely in line with the positions articulate by the leadership of Azerbaijan prior to the Brussels meeting and recently in general, and demonstrates a retreat by the current authorities of Armenia on its foreign policy front,” the statement pointed out.

“The active role of the European Council in the issue of opening the ‘era of peace’ between Armenia and Azerbaijan at an accelerated pace could be understood if the response to the aggression provoked by Azerbaijan against the people of the Republic of Artsakh in September 2020 were vocalized with the same consistency. The emphasis on security and protection of rights during the 44-day war would have been acceptable to some extent for the people of Artsakh, who were defending their sovereignty,” emphasized the Artsakh lawmakers.

In the current circumstances, the authorities of Armenia are obliged to act solely from the standpoint of promoting and protecting the rights of the Artsakh people to self-determination in international instances, based on the decision of the Supreme Council of the Republic of Armenia on July 8, 1992, according to which ‘any domestic or international document is unacceptable for Armenia, in which Nagorno-Karabakh is celebrated as part of Azerbaijan,’” the lawmakers explained.

“For the authorities governing both in Artsakh and Armenia, the priority should be declarations on the proclamation of two Armenian republics, the values enshrined in the decision of September 2, 1991, and the independence referendum of December 10, 1991. Not a single official, not a single political force is authorized to independently decide the future of our Homeland, for the formation of which thousands of our sons gave their lives,” added the statement.

“We are faced with the imperative of making historic decisions, and no one can evade that responsibility for future generations,” the Artsakh lawmakers concluded.