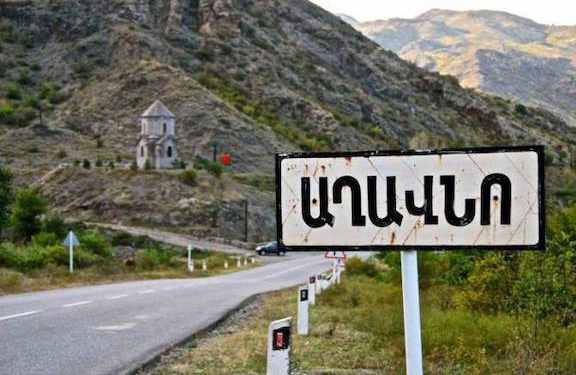 Artsakh President Arayik Harutyunyan said Thursday that after the construction of a road connecting Armenia and Artsakh, the chance any Armenians living in the city of Berdzor (formerly Lachin) “will be very small.” He added, however, that negotiations are underway to salvage the Aghavno village, where hundreds of Armenian families continue to live.

Harutyunyan said that per the November 9, 2020 agreement “we are obligated to leave” Berdzor.

“We have things to do in connection with Aghavno. Negotiations in that regard are continuing. We have not told anyone to ‘get out of Berdzor,'” the Artsakh President said.

He was briefing lawmakers in Artsakh’s parliament about the Artsakh Security Council meeting that was held earlier in the day, as well as the government’s decision on the construction of the road.

Prime Minister Nikol Pashinyan on Monday said that the Artsakh authorities will have the ability to decide the best options for the road, after making the jarring announcement that the area will be conceded to Azerbaijan after the construction of the road is completed.

Stepanakert has given its consent to an alternative route connecting Armenia to Artsakh, Harutyunyan said, adding that the Artsakh authorities will continue to fight for the Aghavno village.

He said there have been several options, but the Artsakh authorities have chosen an option, by which Berdzor will be bypassed.

Referring to concerns that when the road is traversable, Berdzor (Lachin) and Aghavno village—where hundreds of Armenians live—will pass under Azerbaijan, Harutyunyan said the matter is being discussed.

“Negotiations are underway now. We will have to see what options there are. As far as I know, the residents of Berdzor and Sus [village] have received their compensation under our social programs. Regardless of that, we need to bypass Berdzor, and I consider the chance for our compatriots to live in Berdzor in the future to be very small. As for Aghavno, we will continue our negotiations, our struggle,” Harutunyan said.

Harutyunyan told lawmakers that proposals by Russia and Azerbaijan that have been presented when the process began have been rejected by Artsakh authorities.

“The proposed highway has been discussed several times at the [Artsakh] Security Council, which was attended by all political forces present in the [Artsakh] National Assembly. We have chosen, in our opinion, the best option,” said Harutyunyan, adding that the current plan was chosen based on future security concerns for the people of Artsakh, saying that he did not want to divulge confidential information.

He said that after the road is constructed the conditions in that area, and in Artsakh, will be “much safer.

On Thursday, Armenia’s National Security Chief Armen Grigoryan said that there was still time to find solutions for the road and residents who live in the immediate vicinity.

“We have about one and a half years. We will work with the Artsakh government and will find solutions,” Grigoryan said, who reiterated the Armenian government’s position of advancing a “peace agenda,” which it believed is the best possible option of ensuring long-term security in the region.

Canada to Open Embassy in Armenia — Its First in South Caucasus