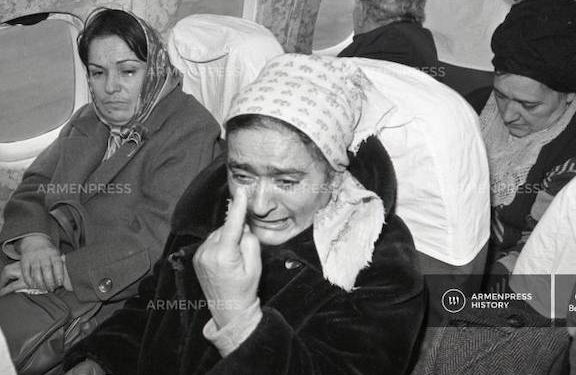 January 13 marked the 32nd anniversary of the Baku pogroms, during which the Armenian population of the city was forcefully driven out, in what was a continuation of the wave of ethnic cleansing by Azerbaijani authorities that began in February, 1988 in Sumgait and continued in Kirovabad, known as Gyanja.

On January 13, 1990 a mass rally took place in Baku with thousands in attendance. Afterward, the crowd separated into smaller groups and began attacking and murdering Armenians in their homes with extreme cruelty. The perpetrators had the addresses of their would-be victims. The mob would drag their victims from their apartments, kill them with metal pipes and knives. Women were raped, and many were burnt alive.

The pogroms, which lasted six days, was organized by the Azerbaijani Popular Front. In the end no Armenian was left in the city, which at one point boasted a population of 250,000 Armenians.

It took six days for then Soviet leader Mikhail Gorbachev to order a state of emergency. He ordered tanks into Baku and dispatched Soviet Army personnel, who clashed with armed Azerbaijani militants.

Hundreds of Armenians fell victim to the state-sponsored pogroms, which were aimed at ridding the country of its Armenian population.
Artsakh’s Foreign Minister David Babayan reflected on Azerbaijan’s state-sanctioned policy of Armenophobia on the anniversary of the Baku pogroms, calling them “one of the manifestations of Azerbaijan’s genocidal policy and one of the bloodiest events.”

Babayan told Armenpress that January 13, 1990 is one of the most tragic and dark chapters in the history of the Armenian people.

“Mass pogroms targeting Armenians in Baku began that day. We must be united, we must engage in the right policy and develop an educated and patriotic society to be able to avoid difficult trials like the Baku pogroms,” Babayan said.

He said it was no coincidence that Azerbaijan’s President Ilham Aliyev gave an interview on the eve of the anniversary and spoke in the same tone which fueled the massacres in the 1990s.

“This shows that the same ideas still exist there; the same approaches prevail and they try to implement the same plans,” said Babayan adding that Azerbaijan is a state where Armenophobia has become its state-sanctioned ideology and it is a fascist country.