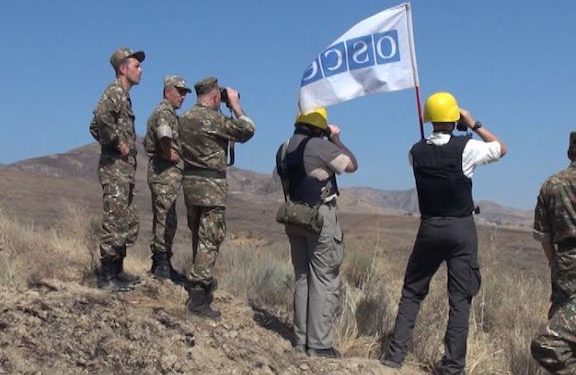 “Azerbaijan itself settled the Karabakh conflict through military and political means,” said Aliyev who reiterated his claim that during the past 28 years, the OSCE Minsk Group co-chairs had made hundreds of trips to the region, however there have been zero results.

“In fact,” Aliyev said, “the mandate given to the Minsk Group to resolve the [Karabakh] conflict may be de jure valid, but it is de facto invalid.”

The U.S. Embassy in Yerevan said on Tuesday that the United States was ready engage in finding a long-term settlement of the conflict, including through its role as OSCE Minsk Group co-chair.

“We welcomed the April 6 meeting between Prime Minister Pashinyan and President Aliyev in Brussels, including positive momentum on preparations for peace talks and the formation of a bilateral commission on border delimitation,” said a statement issued by the U.S. Embassy in Yerevan.

“The United States remains committed to promoting a peaceful, democratic, and prosperous future for the South Caucasus region. As the Secretary emphasized in his recent calls with the two leaders on April 5, we continue to encourage further peace negotiations between Armenia and Azerbaijan and reiterate the United States stands ready to engage bilaterally and with like-minded partners, including through our role as an OSCE Minsk Group Co-Chair, to help the countries find a long-term comprehensive peace,” added the statement.

At their meeting in Brussels last week, Pashinyan and Aliyev agreed to begin the process of drafting a peace deal between Armenia and Azerbaijan.

France’s foreign ministry echoed the sentiments expressed by the U.S. Embassy saying that it will also leverage its role as Minsk Group co-chair to advance efforts in Karabakh.

“France reaffirms its full commitment to the establishment of peace and stability in the South Caucasus region both on a bilateral basis and as President of the Council of the European Union and Co-Chair of the Minsk Group,” said the French foreign ministry.

“France continues to work with Armenia and Azerbaijan in this capacity, so that progress is ensured in humanitarian issues, and continues supporting the works aimed at the delimitation of borders, the process on eliminating the isolation of the region, the preservation of heritage, the signing of a peace treaty between the two countries and the settlement of the Nagorno Karabakh conflict,” said the foreign ministry, citing a February 4 meeting initiated by France’s President Emanuel Macron with Pashinyan and Aliyev as an example.

The French Co-chair of the OSCE Minsk Group Brice Roquefeuil, who visited Armenia on Monday, said that his country wants to preserve the mediation efforts for a settlement to the Karabakh conflict.