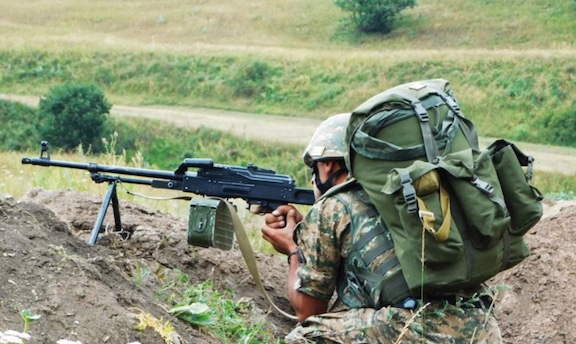 A soldier on the frontline

Russia called on Azerbaijan and Armenia to refrain from actions that may raise tensions in the line-of-conflict, as Azerbaijani forces continued to fire at Armenian positions in Artsakh and Armenia.

“Indeed, a statement adopted at a trilateral meeting in Sochi highlighted the determination of the parties, Azerbaijan and Armenia, to resolve the issue solely through peaceful political and diplomatic means. This is why we continue to urge the parties to refrain from dangerous actions and steps that may raise tensions on the line of contact,” Kremlin spokesperson Dmitri Peskov said on Monday, commenting on reports of shelling attacks, Tass reported.

Leskov’s remarks follow a confirmation by Russia’s Defense Ministry that Azerbaijani forces violated the ceasefire when they opened fire on the Kramort village in Artsakh’s Askeran region.

“At 12:30 on November 5, small arms fire was opened from an Azerbaijani post at a local resident who was carrying out earthworks using agricultural machinery in the area 1.8 kilometers east of Khramort. As a result of the shooting the equipment was slightly damaged, the local resident was not injured,” according to a Russian Defense Ministry statement.

The Russian peacekeepers’ command together with the Azerbaijani side are carrying out investigations of the incident, the Russian defense ministry added.

Artsakh’s Human Rights Defender Gegham Stepanyan on Saturday reported about the shooting from an Azerbaijani military outpost at a tractor of a Stepanakert resident, who was working on his farm in the village of Khramort. As a result of the shooting, the citizen’s tractor was damaged and the data about the incident was passed to the Russian peacekeeping contingent.

Azerbaijani forces opened fire on Armenian military positions in Armenia late on Sunday and early Monday morning, according to Armenia’s Defense Ministry, which added that the attacks were on Armenia’s eastern border with Azerbaijan.