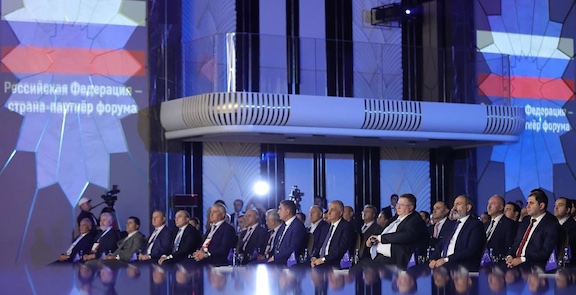 Russian and Armenian leaders gather for the Armenia-Russia Interregional Forum in Yerevan on Oct. 19

Russia pledged to invest $1 billion into Armenia’s economy, with Armenian officials discussing legislation to advance the Russian language in the country, while the Russian Orthodox Church announced its efforts to obtain full-fledged status.

Russia’s Deputy Economy Minister Dmitry Volvach said Tuesday that while trade between Armenia and Russia is recovering from the blows it endured as a result of the pandemic, Moscow is eyeing specific projects, in which it will invest. It was announced on Tuesday, that Russia will build a new subway line in Yerevan.

“Our mutual trade is recovering quite well with 17 percent growth recorded in 2021. This is despite the fact that it fell by almost 4 percent during the pandemic,” Volvach said. “Our investment cooperation is growing: there are more than $2.2 billion of jointly accumulated investments from Russia to Armenia. We know that there are specific projects to the tune of more than $1 billion, which will soon be applied to the Armenian economy.”

Volvach’s comments were made on the margins of the eighth Armenia-Russia Interregional Forum in Yerevan, which is pressing an agenda of further Russian integration with Armenia.

“The Russian Federation not only plays a key role in maintaining peace and stability in our region but also occupies a central place in our country’s economy,” Prime Minister Nikol Pashinyan said in an address to the conference.

“We need to improve our economic relations in a way that will foster the development of competitive industries in our countries,” he told government officials and businesspeople from the two states attending the forum. “In this context, we regard as important further mutual integration of our economies, which must be based on a free movement of goods, services, labor and capital. The [Russian-led] Eurasian Economic Union serves this strategic goal.”

According to Volvach, the investments will become a significant contribution to the development of economic, social, and cultural relations between Russia and Armenia. In particular, they will contribute to the creation of new high-tech jobs and facilitate exchange in various areas of the economy, culture, and infrastructure development, TASS reported.

“According to statistics, currently, Russian investments account for 40 percent of foreign investments in the Republic of Armenia. It seems to me that it is quite logical at least to maintain this share. It is clear that there are investments from other countries, from other partners, but I hope that Russia and Russian business will retain their role and significance in the Armenian economy,” Volvach added.

In turn, Economic Development Minister Maxim Reshetnikov confirmed that in the coming years, Russian companies are ready to invest about $1 billion in the Armenian economy. “Our trade turnover has already exceeded the pre-covid indicators, and Russian companies are among the largest taxpayers in Armenia,” he added.

Reshetnikov said Russia and Armenia are drafting an interregional cooperation plan for the next three years.

The forum is sponsored by Russia’s Economic Development Ministry and Ministry of Territorial Administration and Infrastructure of Armenia. Russian-Armenian interregional forums have been held since 2011 to expand cooperation between the regions of the two states.

Touching upon interregional cooperation, Reshetnikov said that Armenia and Russia have 19 cooperation treaties, which serve as a strong foundation for building cooperation. Reshetnikov also said the Nizhni Novgorod Region of Russia and the Armavir Province of Armenia recently established cooperation.

Armenia’s Education Minister Vahram Dumanyan met with a Russian delegation led by the country’s ambassador to Armenia Sergey Kopyrkin. During the meeting the Armenian minister emphasized the development of the Russian language in Armenia and expressed readiness to discuss new proposals for legislation to be presented to Armenia’s Parliament.

Dumanyan told the visiting delegation that Russia’s support is important in advancing the protection of Armenian historic and cultural heritage that has is currently under the control of Azerbaijan as a consequence of the 44-day war.

Leonid told the Russian RIA Novosti news outlet about plans to rebuild a Russian Orthodox Cathedral in Yerevan. But first, he said, his priority is to complete the process of obtaining full-fledged status for the Russian Church in Armenia.