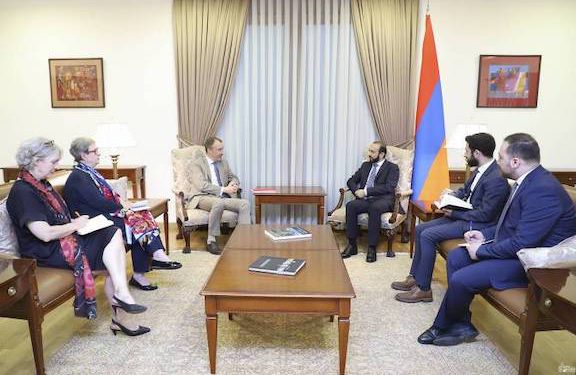 The European Union’s South Caucasus special representative arrived in Yerevan on Friday and held talks with Armenian officials, who sought to revive and restore the OSCE Minsk Group co-chairmanship efforts to mediate a settlement of the Karabakh conflict, as the EU moved to sideline Russia in peace process.

Meanwhile, an EU official who did not want to be identified, told RFE/RL’s Armenian Service that the European Union will not work with Russia on resolving the Nagorno-Karabakh conflict or sponsor confidence building measures to that end, as it has has replaced Russia as the lead player in international efforts to broker peace between Armenia and Azerbaijan.

“There is no movement between the EU and Russia on this and no intention to engage with Russia on this,” the EU official told RFE/RL’s Armenian Service, adding that the joint mediation format established by Moscow, Paris and Washington nearly three decades ago is “not valid any longer.”

“Russia might have stopped the [2020] war between the two parties, but it is clear that the follow-up is taking place here in Brussels and not in Moscow. The reason why they [the leaders of Armenia and Azerbaijan] came to Brussels so quickly is a sign of this,” added the official.

The official told RFE/RL that both Yerevan and Baku are now “very scared of Moscow” because of the war in Ukraine. “They are very aware that they can be next,” he claimed.

As recently as last week, Russia accused the EU of stepping in Moscow’s turf, since it was President Vladimir Putin of Russia who brokered three specific agreements with the leaders of Armenia and Azerbaijan that ended the military actions in Artsakh in 2020 and mandated the creation of commissions to unblock transit links and advance the delimitation and demarcation of borders between Armenia and Azerbaijan.

The European Council President Charles Michel hosted two meeting between Pashinyan and President Ilham Aliyev of Azerbaijan. During the most recent one held on May 22, the leaders agreed that the process of delimitation of borders would begin. The commissions set up by Moscow, Yerevan and Baku were scheduled to meet on Friday.

Pashinyan and Aliyev briefed Putin on the results of their May 22 talks in separate phone calls earlier this week. The Armenian and Azerbaijani foreign ministers assured Lavrov earlier that their governments remain committed to Armenian-Azerbaijani agreements brokered by Putin during and after the 2020 war in Karabakh.

The EU official, who spoke to RFE/RL under the condition of anonymity, said that the EU also hoped to “gradually change” the current understanding that Russian troops will safeguard the transit roads once they are opened. However, he cautioned that it might be “a long shot.”

The EU official also said that the status of Nagorno-Karabakh and the security of its population will be on the agenda of Armenian-Azerbaijani negotiations.

“It is inevitable that this will be on the table at some point but they are not there yet,” explained the official.“This is a topic for the later stage as it will be the most difficult issue. There is no point in front-loading this issue right now.”

Both Pashinyan and Mirzoyan stressed Yerevan’s insistence that the OSCE Minsk Group Co-chairmanship be revived.

Moscow, Brussels and Washington have signaled that due to the military campaign against Ukraine, cooperation between the three countries has become impossible.

Mirzoyan told Klaar that Azerbaijan’s continuous attempts to destabilize the situation in South Caucasus through military rhetoric and provocations on the border were unacceptable. He also pointed to Aliyev’s recent statements that distorted the essence of talks between Armenian and Azerbaijani leaders.

Michel, the European Council President, through a spokesperson negated Aliyev’s assertions that the Karabakh conflict has ended and that the sides have agreed to open a “corridor” through Armenia to connect mainland Azerbaijan with Nakhichevan.