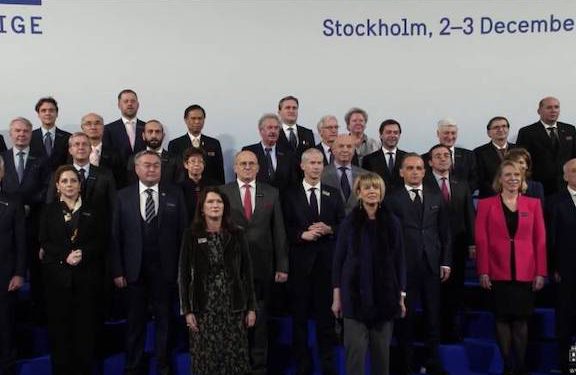 Foreign Ministers of OSCE member-states gather in Stockholm on Dec. 2

A year after Azerbaijan’s aggressive attack on Artsakh and the ensuing ceasefire agreement signed on November 9, the situation in Karabakh, as well as along the Armenia-Azerbaijan border remains tense, Foreign Minister Ararat Mirzoyan said during an address to the OSCE Ministerial Council meeting in Stockholm, Sweden on Thursday.

“Since May 2021, Azerbaijani armed forces have breached the borders of Armenia. Up to now, they maintain and continue strengthening their illegal presence on the sovereign territory of Armenia,” he explained.

“Through its aggressive actions, Azerbaijan is flagrantly violating the United Nations Charter and the principles of the Helsinki Final Act. Needless to say, Azerbaijan’s actions also violate its obligations under the trilateral statement of November 9 on the cessation of all hostilities,” added the foreign minister.

He also stressed that Azerbaijan continues to capture and hold captive Armenian servicemen and civilians.

“Not only does Azerbaijan continue to ignore the calls of the international community for the immediate and unconditional release of all Armenian prisoners of war and civilian hostages, but on a number of occasions, most recently on November 16, its armed forces captured more military personnel in the course of its attack on the territory of the Republic of Armenia,” said Mirzoyan.

No pretext can justify these violent actions, Mirzoyan said, adding that “the continued presence of Azerbaijani armed forces on the territory of Armenia is a destabilizing factor in the region.”

He voiced hope that the November 26 trilateral meeting organized by the Russian Federation would pave the way for taking certain measures toward the de-escalation of the situation in the region.

“The use of force has never been a way to peace in general and in particular in our region.  The use of force can de-freeze dormant conflicts for a certain period of time, but they will get frozen again once there is no negotiated and peaceful solution. War can come as a unilateral choice but peace always requires consent of all sides,” Mirzoyan said.

He stressed that Armenia is willing to achieve lasting stability in the South Caucasus and is ready for negotiations to achieve that.

“The sooner Azerbaijan embarks on the resumption of the peace process, the better will the chances be to achieve comprehensive and durable settlement in our region. The definition of the status of Nagorno-Karabakh based on the right to self-determination, the safe and dignified return of the displaced Armenian population throughout the entire territory of Nagorno-Karabakh should be substantive issues of negotiations. Equally, the resolution of pending humanitarian issues such as unconditional return of all Armenian POWs and other captives, inquiry into the cases of enforced disappearances, protection of cultural heritage, necessitates the strong engagement of the OSCE and its relevant mandates,” Mirzoyan emphasized.

Baku Has Given Azerbaijani Names to Several Cities in Syunik