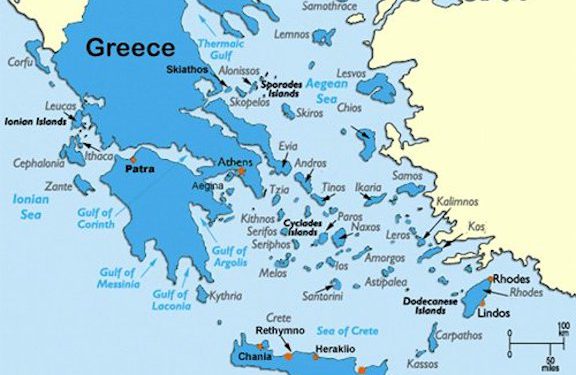 ATHENS, Greece (AP) — Greece’s government has written to the country’s NATO and European Union partners and the head of the United Nations, asking them to formally condemn increasingly aggressive talk by officials in neighboring Turkey and suggesting that current bilateral tensions could escalate into a second open conflict on European soil.

In the letters, copies of which were seen Wednesday by The Associated Press, Greek Foreign Minister Nikos Dendias said the behavior of his country’s historic regional rival — and NATO ally — should be censured by the three bodies.

“By not doing so in time or by underestimating the seriousness of the matter, we risk witnessing again a situation similar to that currently unfolding in some other part of our continent,” he wrote, in an allusion to the war in Ukraine. “This is something none of us would really wish to see.”

The letters dated Monday and Tuesday come at a low point in relations between the two neighbors, who are separated by centuries-long enmity and contemporary disputes, including Aegean Sea boundaries and immigration. Greece and Turkey have come close to war three times in the last half-century.

On Tuesday Turkey’s president reiterated a thinly veiled invasion threat made over the weekend. Athens responded that it’s ready to defend its sovereignty.

In the letters to NATO Secretary General Jens Stoltenberg, EU foreign policy head Josep Borrell and U.N. chief Antonio Guterres, Athens quoted Erdogan’s references to Greek “occupation” of Aegean Sea islands that have been part of Greece for decades, and to the Greek people as “vile.”

“The Turkish leadership has apparently chosen to present future aggression as already prepared and, more importantly, as a justified action,” he said. “Unless seen in its true dimensions and properly dealt with by the international community, this Turkish attitude risks destabilizing our wider region and causing consequences of which the gravity is hard to assess.”

Turkish President Recep Tayyip Erdogan said Tuesday that Turkey could “come all of a sudden one night” in response to perceived Greek threats, suggesting a Turkish attack cannot be ruled out.

Ankara says Greece is violating international agreements by keeping a military presence on islands close to Turkey’s Aegean coastline. It has also accused Greek air defenses of locking on to Turkish fighter jets during NATO exercises over the eastern Mediterranean.

Greece says it needs to defend its eastern islands — including tourist hotspots Rhodes and Kos, which are much closer to Turkey than to the Greek mainland — against its larger and militarily stronger neighbor.

Dendias on Tuesday accused Turkey of carrying out 6,100 Greek airspace violations this year, including 157 overflights of Greek territory.

Greece almost daily scrambles fighter aircraft to identify and intercept Turkish military planes and often simulated dogfights break out, which have led to several fatalities in the past decades.

“The Turkish attitude is a destabilizing factor for NATO’s unity and cohesion, weakening the southern flank of the alliance at a moment of crisis,” Dendias wrote to Stoltenberg.