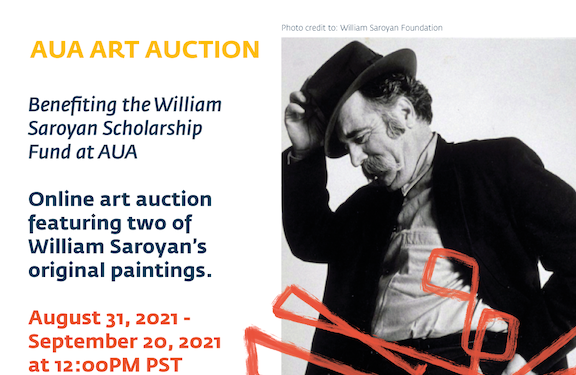 William Saroyan has long been hailed as not only one of the most influential literary figures of his period, but also as a most revered member of the Armenian Diaspora. His influence runs deep in the hearts and minds of so many, with his most famous saying about Armenians quoted, or rather misquoted, endlessly by those who have never even read his works, a proving testament, year after year, to the lasting power of his name.

Recently, the American University of Armenia received a generous contribution of two of William Saroyan’s original paintings from the William Saroyan Foundation. The beautiful works of art are exhibited online and are being auctioned off to raise funds to support scholarships for AUA students. The auction begins on August 31st, the anniversary of William Saroyan’s birthday, and ends on September 20th. The scholarship will be named “The William Saroyan Scholarship” and will provide quality education to Armenian students at AUA, enabling them to become the next generation of thought leaders, innovators, and entrepreneurs driving Armenia to prosperity.

Founded in 1991, the American University of Armenia is a private, independent university located in Yerevan, Armenia, affiliated with the University of California, and accredited by the WASC Senior College and University Commission in the United States. AUA provides local and international students with Western-style education through top-quality undergraduate, graduate, and certificate programs, promotes research and innovation, encourages civic engagement and community service, and fosters democratic values.

The American University of Armenia aims to have an impact on students and the community as a center of academic excellence, innovation, inquiry, and diversity that contributes to the further development and advancement of Armenia, the region and the world through teaching and scholarship, fostering creativity, integrity and community service. In addition, the University’s need-blind admission policy ensures that those who seek an education at AUA are able to pursue it without finances being a hindrance to their educational goals.

To participate in the online auction by bidding on a painting or contributing a donation to the William Saroyan Scholarship Fund at AUA, please visit the website.