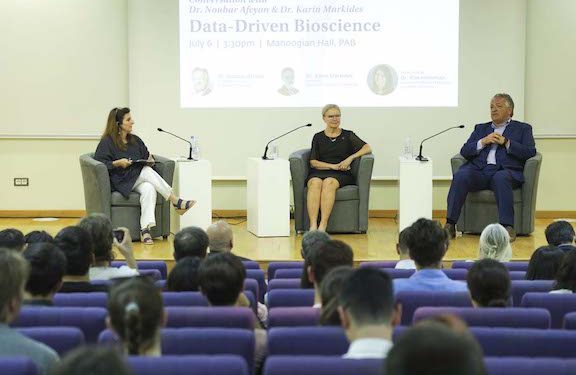 The conversation was moderated by Columbia University and AUA Professor Dr. Kim Hekimian, who opened the talk by inquiring about the greatest achievements and challenges in the field of bioscience. To this, Dr. Afeyan said, “We’ve made some progress, but that progress has taught us just how little we know, in increasing increments. In other words, every year, we learn even more what we didn’t know about than we did the previous year.”

To fix that, he explained, scientists can measure massive amounts of information of every scale and every type. The greater progress is made in developing algorithms that can deal with complex systems, the more scientists begin to use those data to predict, model, and influence biological systems. “To me, data-driven bioscience — whether it’s applied to epidemiology, medicine, health, or any number of things — is all about attacking the problem with measurements, and then being able to distill them down to some useful models with which we can do things,” he concluded.

The panelists also broached the topic of preemptive care and health security, exploring how society can shift towards prioritizing these aspects of public health. “We are obsessed with physical security,” remarked Dr. Afeyan. “Why don’t we care about health security as much?” Speaking on the importance of preemptive care, he noted that scientists tend to spend most of their time working on the most serious diseases in their latest stages, which is one of the hardest problems to solve as few solutions remain at such a point.

Dr. Markides then spoke about the role higher education institutions play in collaborating with the industry and its stakeholders in advancing the field of bioscience. Dr. Markides highlighted the fact that universities house the next generation of scientists and have access to all the disciplines that could disrupt and transform any challenge or solve any problem. “No other stakeholder has these advantages,” she remarked. “We also have a long-term vision, so we should utilize those assets available to us.”

Dr. Markides also emphasized the transformative approach universities must take to involve themselves in the field of bioscience. “For so many years, universities have focused on different disciplines and siloed themselves because that is how scientists can handle and control experiments,” she said. “Now, we need to shift that. In order for us to train these computers to be most effective, we have to increase the amount of data we input and ensure that the data is relevant and open so that others can use it as well.”

4. Dr. Arman Voskerchyan discussing the pertinence and relevance of health security for Armenia

At the end, HENAR Co-Founder and Chairman of the Board of Trustees Dr. Arman Voskerchyan thanked AUA for co-hosting the event and cited statistics which illustrate the pertinence and relevance of health security specifically for Armenia.

In conclusion, Dr. Afeyan encouraged the audience, particularly students, to think about their current and future academic endeavors in terms of acquiring, applying, and creating knowledge, which he described as the scientific process of discovery. He argued for a completely new approach to acquire and create knowledge, departing from the traditional incremental hypothesis-driven way. “Our imagination — or the computer-aided part of imagination, which is machine learning as far as I’m concerned — is the ability to foresee the next science that doesn’t yet exist, and see if you can leap to some new capabilities, new learnings,” said Dr. Afeyan. “That capability exists in your own brains.”