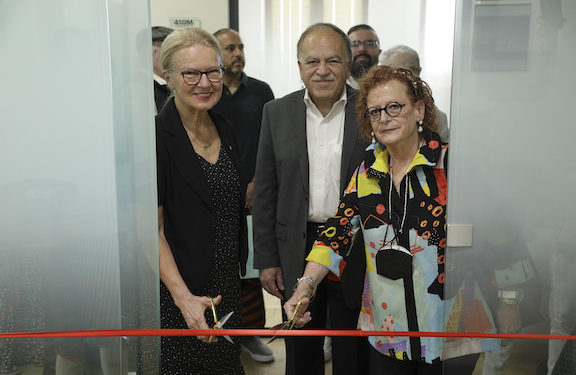 YEREVAN—The American University of Armenia hosted a ribbon-cutting ceremony on June 27 for the Sona Hamalian conference room (413M), named in memory of the first director of the AUA Extension program.

Since the day AUA opened its doors in 1991, Hamalian served as the administrator and right-hand assistant to Dr. Mihran Agbabian, AUA’s co-founder and first president. In 1992, she became the director of AUA Extension, now called Open Education. Following her untimely death, Hamalian’s twin sister Sossy and her husband Dr. Vicken Aharonian, both AUA Pillars, memorialized her legacy by naming conference room 413M in the AUA Main Building in her honor.

The ceremony was attended by the Aharonians’ and Hamalians’ immediate family members, close friends and relatives, as well as AUA community members who had known and worked with Sona Hamalian in the past.

Following the ribbon-cutting, the guests gathered for a reception in the Faculty Center. In her welcoming speech, AUA President Dr. Karin Markides addressed the guests highlighting the naming of 413M Sona Hamalian conference room in commemoration of her life and in honor of her memory.

“Sona Hamalian was a well-respected and devoted member of the AUA community, whose memory will live on through the widely used Sona Hamalian conference room, which serves as a meeting point for discussions, interviews, and team meetings to collaborate, recruit the best faculty and staff, and work towards the flourishing future of the University. She would have been very proud to see all the accomplishments AUA continues to have,” said Dr. Markides.

AUA’s co-founder and former president Dr. Armen Der Kiureghian reflected on the past, on the University’s inception and Hamalian’s crucial role in its development.

“Dr. Mihran Agbabian hired Sona around July of 1991. He was familiar with her work ethic and skills. Sona did an impossible job in setting up offices, classrooms, library textbooks, the registrar’s office, housing for faculty members, and more. It was all possible due to her dedication and commitment to the University,” remarked Dr. Der Kiureghian.

Following his speech, Dr. Der Kiureghian shared a short passage from Sona Hamalian’s report on the Extension program. The very last paragraph of the report contained the following message: “When asked, ‘What is your vision for the 90s,’ I respond humorously. “I am not a visionary. I am a dreamer and I have fantasies”. We are excited for our next 1000 years (after all, for a nation 4000 years old, this kind of exaggeration is permissible). The technological advancements of recent years are revolutionizing education, and we are looking forward to providing the highest quality of instruction in the formats that best serve Armenia’s educational goals.”

Dr. Vicken Aharonian, brother-in-law to Sona Hamalian, shared the thought that had inspired the naming of the conference room in her honor and expressed gratitude to the University staff, faculty, and guests for their support and efforts in developing Armenia.

“We wanted to honor her memory. Nobody will live forever, but it is good to create something that will, and I hope that this conference room will serve AUA, where her name will endure forever,” said Aharonian. “We are truly grateful to the University, which we have been supporting for many years. AUA is the future of this country. I wish you the best. Thank you very much.”

For more information on naming opportunities at AUA, visit the website.

Founded in 1991, the American University of Armenia (AUA) is a private, independent university located in Yerevan, Armenia, and affiliated with the University of California. AUA provides a global education in Armenia and the region, offering high-quality graduate and undergraduate studies, encouraging civic engagement, and promoting public service and democratic values. For more information about AUA and its donor opportunities, please visit the website.

Gymnastics Element Performed by Artur Davtyan Named After Him