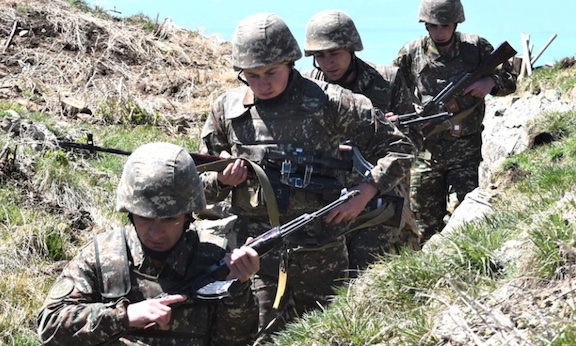 Soldiers of the Armenian Armed Forces

Azerbaijani forces continued to violate the ceasefire on the border with Armenia, with reports of shooting in the Gegharkunik province on Friday.

Karen Sargsyan, the governor of Armenia’s Gegharkunik Province confirmed to Azatutyun.am that on Friday morning Armenian positions in the Kutatkan village came under fire from Azerbaijani forces.

Sargsyan added that there have been no evacuation orders, although only 10 men remain in the village who said they are there “to defend their homes.” He added that women and children abandoned the village after Azerbaijan’s attacks on September 13. They are part of the more than 7,800 people who have been displaced as a result of this attack.

An Armenian soldier was wounded late Wednesday night as result of Azerbaijani shooting, which was reported to have occurred at around 8 p.m. local time on Armenia’s Independence Day.

On Thursday, Armenia’s Defense Ministry spokesperson Aram Torosyan said that the Wednesday night skirmishes took place in the Sotk village of the Gegharkunik Province, which was heaving damaged as a result of last week’s attack on Armenia’s borders.

He also reported that two Armenian soldiers who were surrounded by Azerbaijani forces for nine days were safely extracted from captivity.

“We successfully extracted Captain Artyom Gevorgyan and Junior Sergeant Arman Pilosyan who were besieged for 9 days,” Torosyan said in a statement.

U.S. Calls on Azerbaijan to Return Troops to Initial Positions