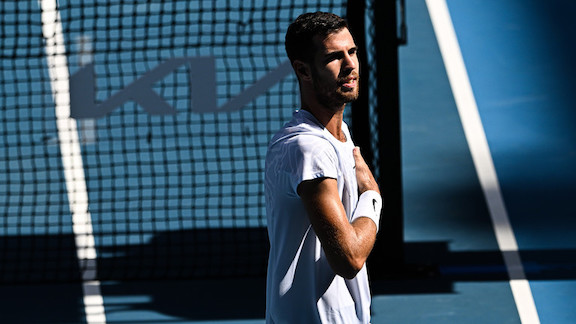 The Azerbaijan Tennis Federation is reportedly up in arms and furious at Russian-Armenian tennis star Karen Khachanov, who last week after winning a match at the Australian Open, voiced his support for the people of Artsakh who are being blockaded by by a group of Azerbaijani backed by the Baku government.

“Keep believing and fighting until the end. Artsakh stay strong!,” Khachanov, 26, who has acceded to the Australian Open’s quarter finals, wrote on his traditional post-match message. Custmarily the winning player writes a message on the camera lens. Khachanov had just defeated American Frances Tiafoe.

The Azerbaijan Tennis Federation expressed its anger in separate statements following both of Khachanov’s messages, describing it as an attack on the country, RT, the Russian television channel reported on Monday.

“The letter provides facts and legal documents relating to the attack on our country. The Azerbaijani Tennis Federation has called for tougher measures to punish the tennis player and to avoid such incidents in the future. We hope that quickly the issue will find an objective solution,” it added.

A second message followed at the weekend, and said that Azerbaijani tennis boss Ogtay Asadov had spoken to his counterpart at the Russian Tennis Federation, Shamil Tarpischev, on the matter. “As the Azerbaijani Tennis Federation, we hope these attacks will never happen again, and we expect Karen Khachanov to be punished for these actions,” read the statement.

Khachanov, meanwhile, will play his Australian Open quarterfinal against American rival Sebastian Korda in Melbourne on Tuesday. He is competing to reach the semifinal of Grand Slam for the second time in his career, having progressed to the last four of the US Open in September of last year.