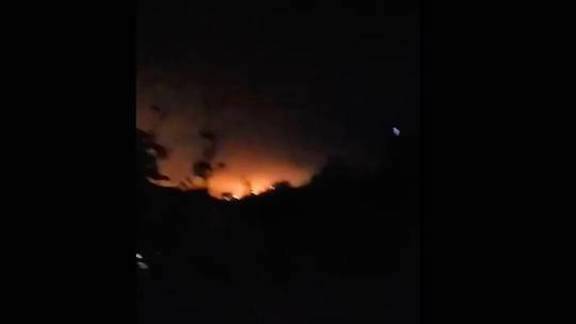 A photo of the explosions in cities within Armenia proper, found on Telegram

Explosions attributed to artillery and drones were reported by residents of Vardenis, Jermuk, Goris, and Tatev – cities within Armenia proper – shortly after midnight on Tuesday. Armenia has blamed neighboring Azerbaijan for the attack, RT reported.

Prime Minister Nikol Pashinyan told a special session of parliament on Tuesday morning local time that 49 soldiers have been killed due to the Azerbaijani attacks, adding, however, that number will grow as defense officials continue the task of identifying the bodies.

Shots are being fired “along the entire line of the Armenian-Azerbaijani border,” and the government in Yerevan has called an urgent meeting, according to local media.

The Armenian Defense Ministry said the army of Azerbaijan has used heavy artillery and drones are also being used. A Turkish-made Bayraktar drone was allegedly shot down over Vardenis, which is in northern Armenia and not adjacent to the disputed region of Nagorno Karabakh. Armenian troops are “giving an adequate response,” Yerevan said.

“The Armed Forces of Armenia are taking adequate countermeasures. The Ministry of Defense will regularly issue official updates on the developments,” added Torosyan.

Starting at 12:05 a.m. on September 13, the Azerbaijani Armed Forces launched intense artillery and large caliber firearm shelling of Armenian positions in the direction of Goris, Sotk and Jermuk.

The Azerbaijani forces are also using UAVs in the attack, the Armenian Ministry of Defense said.

Armenia’s Defense Ministry said that the “intensive” shelling began shortly after midnight. It gave no other details.

Residents of several Armenian border communities told RFE/RL’s Armenian Service that they are hearing powerful explosions and gunfire. The mayor of one such village, Verin Shorzha, spoke of “intensive gunfire” coming from Azerbaijani army positions across the local section of the long border.

Another local government was quoted by news.am as saying that the residents of the nearby village of Norabak are fleeing their homes.

As a result of the offensive actions of Azerbaijan in different directions of the Armenian-Azerbaijani border, the Armenian side has suffered casualties, according to Torosyan. He added that the number of victims and the wounded are being verified.

Torosyan said that the situation on the Armenian-Azerbaijani border continues to be extremely tense as of 4:00 p.m., and that the shooting that started as a result of the large-scale provocation by the Azerbaijani side continues with unabated intensity.

“The adversary continues to use artillery, mortars, UAVs and large caliber firearms. Both military and civilian infrastructure are being targeted. In some directions, the Azerbaijani units have taken actions for advancement of positions. Positional battles continue,” said Torosyan, adding that the Armed Forces of Armenia adequately retaliate and fully fulfill the combat tasks set before them. “The military-political leadership of Azerbaijan bears the entire responsibility for the created situation and its further developments,” he said.

Nikol Pashinyan considered the actions of the Azerbaijani side unacceptable and emphasized the importance of an adequate reaction of the international community.

According to the office of the Prime Minister, Pashinyan held a telephone conversation with French President Emmanuel Macron. The Prime Minister expressed deep concern about the created situation and emphasized the importance of adequate reaction of the international community.

President Macron considered further escalation of tension unacceptable and stressed the need to de-escalate the situation.

The government of Azerbaijan said Armenia “began widespread provocations” against the Azeri armed forced, which responded with “intensive fire” on Armenian positions.

“This is an egregious violation of the ceasefire and a direct attack on Armenia’s sovereignty. The U.S. must halt all assistance to Azerbaijan – immediately and permanently,” wrote Representative Adam Schiff in a Facebook post.

“I am outraged by reports of heavy and coordinated Azeri artillery strikes on peaceful Armenian towns. To be clear: these are internationally recognized Armenian towns, NOT disputed territory. It’s unconscionable that the US continues to provide Aliyev w/ military aid,” wrote Congresswoman Jackie Speier on Twitter.

“This evening my thoughts are with Armenia and Armenians. Azerbaijan launched a large-scale attack, once again violating the territorial integrity of our friendly country. Tomorrow I will immediately appeal to Foreign Minister Catherine Colonna so that France stands by Armenia,” wrote French MP Sabrina Agresti-Roubache in a post on Twitter.