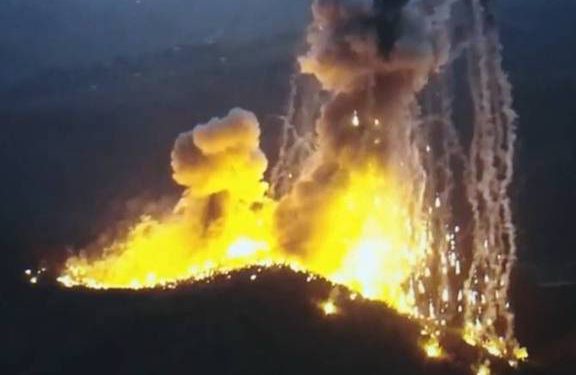 A preliminary investigation into Azerbaijan’s violations of international law during the 44-Day war confirmed that Azerbaijani forces used phosphorous bombs, the use of which in combat has been long banned, during its aggressive attacks on Artsakh’s Martuni region.

To investigate the violations of international law during the aggressive war unleashed on Artsakh by Azerbaijan beginning on September 27, 2020, an expert group was formed to gather and examine unexploded remnants and shells.

Artsakh’s Prosecutor General’s office on Friday said that as part of that investigation an unexploded rocket found in the Artsakh’s Martuni, as well as samples obtained from it were submitted for analysis.

The expert group said the weapon and its relevant samples contained white phosphorus. The report was concluded on December 7.

The entire process of detecting, neutralizing and sampling of munitions was carried out with the participation of specialists who recorded the activities and, according to the Artsakh prosecutor general’s office will be submitted for examination to international experts.

“Thus, according to the results of the expert research, it was confirmed that during the 44-day war in 2020, the armed forces of Azerbaijan directly targeted the civilian settlements with chemical weapons, causing mass destruction and a large number of human losses, suffering and damage (a number of videos testifying to the use of chemical weapons were published during the war and after),” said the prosecutor’s office.

The report concluded that Azerbaijan grossly violated Article 35 of the Geneva Convention (Protocol 1), according to which: