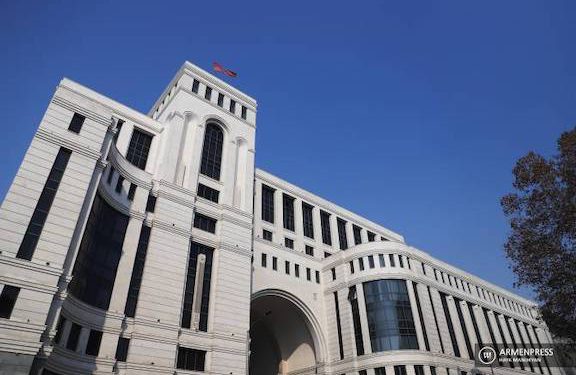 Armenia’s Foreign Ministry on Friday condemned the criminal prosecution of Armenian prisoners of war Lyudvik Mkrtchyan and Alyosha Khosrovyan who were put on trial in Azerbaijan on trumped up charges of allegedly torturing captives during the 1990s Artsakh Liberation War.

“Continuing to violate the norms of humanitarian law, particularly the Geneva Convention on the Treatment of Prisoners of War, which explicitly states that prisoners of war must be released and repatriated immediately after the cessation of hostilities, Azerbaijan has brought trumped-up criminal charges against 14 captured Armenian servicemen, which also violates the trilateral statement of November 9, 2020,” said the foreign ministry in a statement.

“The criminal cases against 16 Armenian servicemen, as well as the torture and psychological pressure of other Armenian prisoners of war and captured civilians set a precedent for the malicious violation of international law. It is clear that Azerbaijan is using captives as political hostages and tools to pursue other goals,” explained the foreign ministry.

“Despite numerous calls from the international community, Azerbaijan continues to conceal the true number of the prisoners, denying the captivity of dozens of Armenian servicemen and civilians,” the foreign ministry said. “Furthermore, Azerbaijan denies the detention of those whose captivity in Azerbaijan has been documented both through video and testimonies of repatriated prisoners, which raises suspicions for a number of serious crimes.”

“All Armenian prisoners of war and civilian captives held in Azerbaijan must be immediately released and repatriated without any preconditions,” declared the foreign ministry.