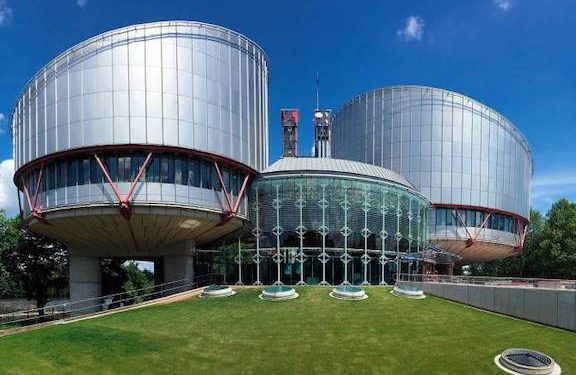 The European Court of Human Rights

In two judgments issued on Thursday the European Court of Human Rights ruled that Azerbaijan has violated the rights of two Armenian citizens to life and has obliged the country to pay 40,000 euros in each case.

The case of Petrosyan v. Azerbaijan concerns the death of the applicant’s son while in Azerbaijani captivity.

The applicant’s son Karen Petrosyan, was born in 1981 and was living with the applicant and other members of the family in Chinari, close to the border to Azerbaijan. On August 7, 2014 he crossed the border into Azerbaijan and was captured by the Azerbaijani armed forces.

On the same day two video recordings of Petrosyan were broadcast by Azerbaijani media. In the first one, he was seen being offered tea by a local resident of the village of Aghbulag and having a conversation with some of the other villagers. In the second recording, he was being interrogated, while standing on his knees with his hands cuffed and being restrained by soldiers. The interrogating army general accused him of being a soldier, having killed civilians, incited hatred and caused aggression.

Being shown photographs of him in military uniform, allegedly found on his mobile phone together with phone numbers of his military commanders, he stated that he was a military serviceman.

On August 8, 2014 the Azerbaijani Ministry of Defense announced in a news report that Petrosyan had died unexpectedly, according to preliminary information due to “acute cardio-pulmonary and myocardial failure.”

Efforts were made by Armenia and the International Committee of the Red Cross (ICRC) to have Petrosyan’s body returned. Representatives of the US State Department and the French Ministry for Foreign Affairs expressed their concern about the failure to return the body and give information on the circumstances surrounding the death.

On October 10, 2014, Petrosyan’s body was repatriated in a severely decomposed state.

The Court found that the respondent Government have not convincingly accounted for the circumstances of the death of Karen Petrosyan.  On the basis of the information available to it, it is not possible for the Court to establish exactly what happened to Karen Petrosyan while in detention. In the light of the injuries that were identified and the lack of plausible explanations as to how they had been inflicted on him, the Court finds however that it has been sufficiently proved that he was victim of severe physical violence prior to his death, to a degree that amounted to a violation of Article 3 of the Convention in respect of him.

Article 3 of the Convention prohibits in absolute terms torture or inhuman or degrading treatment or punishment. The Court also held that there has been a violation of Article 2 (right to life).

The case of Khojoyan and Vardanyan v. Azerbaijan concerns the captivity and treatment of the applicants’ father in Azerbaijan.

On the morning of January 28, 2014 the applicants’ father, Mamikon Khojoyan, born in 1937 and a resident of the village of Verin Karmiraghbyur in the Tavush region of Armenia, close to the border to Azerbaijan, left his home. Later the same day, he appeared in a video online, surrounded by a group of people in civilian clothes and a person in Azerbaijani military uniform. On 30 January he was interviewed by Azerbaijani ANS TV. The Azerbaijani online news agency News.az reported the same day that Khojoyan was in detention and that the Ministry of National Security had stated that he was a guide of an Armenian sabotage group and had held a gun when he was apprehended.

On January 31, Khojoyan appeared in another Azerbaijani TV broadcast which was uploaded on Youtube. The Court has received the three videos and links to their appearance on Youtube from the applicants.5.  On March 4, 2014, through the mediation of the International Committee of the Red Cross (ICRC), Khojoyan was handed over to the Armenian authorities.

On March 5, 2014 Azerbaijani TV relayed an official statement from Azerbaijani authorities that Khojoyan had been injured while captured as an armed guide of an Armenian subversive group and had been taken to Baku where he had received medical treatment, including the removal of a bullet from his arm.

No criminal investigation was undertaken by the Azerbaijani authorities, either in relation to the events surrounding Khojoyan’s crossing of the border and his alleged subversive motives or with regard to his treatment in detention.

The Court declared by majority that the complaint under Article 2 (right to life), Article 3 (prohibition of torture) and Article 5 (right to liberty and security) admissible.

In both cases the Court obliged Azerbaijan to pay 40,000 euros to the applicants.