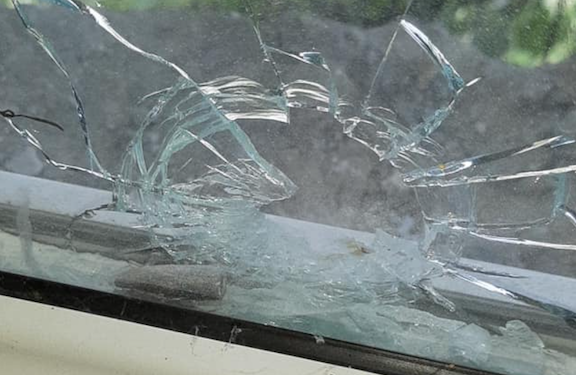 Windows of homes damaged by Azerbaijani attacks from occupied Shushi

“Bullet fragments from various caliber weapons fired in the direction of the Armenian positions located in front of the village of Mkhitarashen of the Askeran region reached the residential part of the village, and at around 8 p.m. [local time] the house of one of the residents of the community was damaged from the shots fired from Shushi,” explained Stepanyan.

“Azerbaijan’s conduct once again demonstrates that Azerbaijani positions that are located near peaceful civilian communities should be removed from those areas where it is not possible to directly target civilians, as they pose a direct and real threat to the lives and well-being of the people of Artsakh and other vital rights,” Stepanyan said.

The Artsakh Human Rights Defender emphasized the need to introduce clear mechanisms for investigating incidents, which will allow prosecuting the perpetrators of incidents and preventing their recurrence.

The defense ministry said the false information being disseminated by Azerbaijan is party its ongoing misinformation campaign.

Asatryan, Abajian Introduce Resolution Calling on US to End Aid To Azerbaijan